Really the defining feature of this post is the stops on the way. I spent quite a lot of time at two houses which owned by families which have hosted PCT hikers day in and day out for decades: Donna and Jeff Saufley in Agua Dulce (aka Hiker Heaven) and Terri and Joe Anderson in Green Valley (aka Casa de Luna), separated by about 24 miles on the trail. I think both families started hosting hikers in the 90s, before the trail blew up courtesy of Cheryl Strayed and Reese Witherspoon, and have continued to do so on an industrial level since. How they manage to do so without burning out is beyond me, and both were real highlights, if having adopted different approaches to handling large groups.I arrived into Hiker Heaven on Day 28 in the early afternoon there. Given the high heat that had beset us lately, I stayed until the evening of Day 29, before a night hike out.The Saufleys have a very professional approach to managing the numbers, without it feeling imposing on the hikers. They have a team of volunteers who brief the hikers and hand out maps, and hikers can find well-marked party tents, a yard for camping, a laundry service, well-maintained porta-potties, and a delineated tobacco-smoking area (interestingly, and perhaps surprisingly, the house rules stipulate that cannabis products are welcome anywhere). The house is a mile or two out of the center of Agua Dulce (itself not more than three restaurants and a grocery store), and volunteers organize a shuttle in the bed of a pickup truck every hour and a half. These guys are business hippies – you’ll have a great time, but (and?) they’ve got a system.

I headed out in the evening so that I could get to the next stop, Casa de Luna, without too much midday hiking. I hiked with this Czech dude Petr (red shirt above), who I’m trying to anoint with the trail name Soya Boya, because he bought some “extra virgin olive oil” which, upon reading the ingredients list, is only 6% extra virgin olive oil and 94% soybean oil (it would be Soy Boy, but he’s a euro, so it’s Soya Boya).We hiked around 10 miles out of 24, then camped around midnight. The next morning, we were hiking around 6, my earliest start yet, I think. Got to Green Valley around midday, and again spent the rest of the day and most of the next day there.Whereas Hiker Heaven is hippies with a system, Casa de Luna is more chaotic, but in a great way. There’s a list of house rules, the first two of which are “1. Hug Terri” and “2. Put on a Hawaiian shirt”. Terri hangs out outside chain smoking, while Joe sports long hair and a beard and listens exclusively to the Dead while flipping pancakes for daily breakfast (daily dinner of nachos).I spent most of my days there hanging out on couches in the driveway with other Hawaiian-shirted hikers (my shirt wasn’t actually Hawaiian, but that’s fine). I also went for a session of frisbee golf with Shea and Machine, who may be the start of a trail family (been hiking sort of with them for a week or two now). We’ll see. 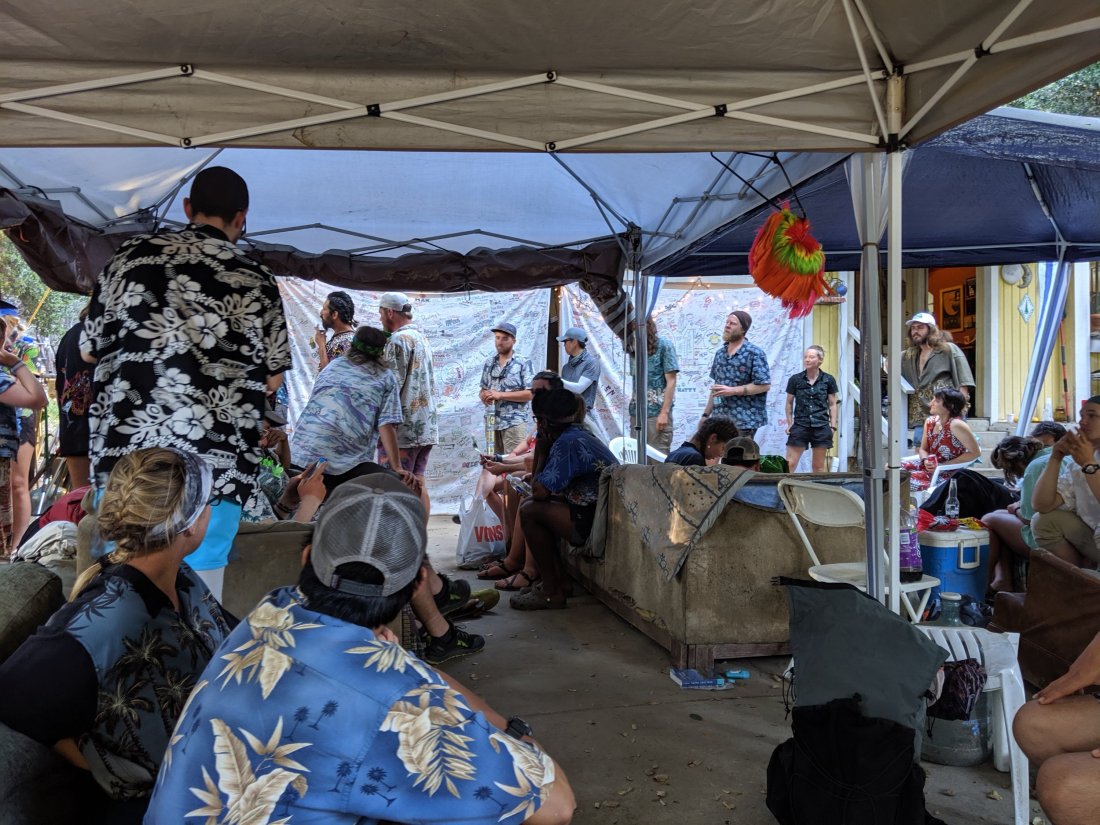 Another tradition of Casa de Luna is to paint a rock. I skipped this one because my penmanship is atrocious, but here are some I liked.

We all camped in the backyard in a seemingly endless manzanita forest.

Into and Across the Desert

I got out of there for a couple of miles on Day 31 for a couple miles. My friend Rachel and her pooch Bapu joined me for that night and the next day from Pasadena. Got 18 miles the next day, but Rachel and Bapu had to turn back after 12 because he’s an old fellow and wasn’t necessarily up to the big miles. Spent the night at a lovely campground in a weirdly wooded section and had a nice campfire.Hiking was pretty boring in this stretch: a fair amount of up and down, but not many big views and a lot of bushes rather than trees. Still a view good shots and nice wildflowers, which I post below (not all belong here chronologically, but I don’t really care).

On Day 33, I did 20 miles finally down out of the hills and into the Mojave Desert, to the town of Neenach. In theory, the trail should be able to skirt around the desert floor entirely, but private property issues say otherwise at the moment (I understand that the PCTA has obtained an easement from said property holders and is working on rerouting the trail around the desert, but that’s still a year or two out).

A local market in Neenach called Wee Vill Market has recently discovered the whole through hiking scene and has begun hosting hikers in the yard next door. They were all super friendly, and ran regular shuttles between the trail and the market (probably 10 miles apart), while letting us use their facilities for toilets, showers, and bucket laundry. Also, the food they served was delicious.

It’s now mid June at relatively lower altitudes, so heat and water are becoming a factor. As such, the strategy has shifted to avoid hiking the middle of the day. The stretch across the floor of the Mojave Desert is around 20 miles (depending on how you define the beginning and end).Myself, Shea, and Machine headed out onto the Aqueduct stretch around 8:20 pm, and hiked 24 miles by sunrise the next morning, and made it to shady oak tree by a small stream. It was a huge mental and physical struggle, and I think we probably all almost fell asleep while walking, but it was better than walking the straight shadeless section in the heat.

We arrived at our shade tree at around 6:30 am and spent the entire day napping in the sun. Shade and water is far between here, so many other hikers (maybe two dozen) joined us throughout the day.

After napping all day under the tree, I set off in the evening into the Tehachapi Mountains, the last range before the Sierras. This is a pretty low, dry range, so not hugely more pleasant than the desert floor.It was either 17 or 25 miles to Tehachapi, depending on the road you use to hitch into town. For a few reasons, I wanted to get the longer distance in before town, which means that I’m now ahead of many other hikers who took their first chance to get to town. I hiked to the first road on Day 35, then did the last 8 miles to Hwy 58 in the morning of the Day 36. Hiking wasn’t particularly exciting, and many people are skipping these 8 miles altogether (this would mean failing to get to Canada unassisted, so I couldn’t countenance it for myself, but to each their own). There were literally thousands of wind turbines throughout the Tehachapi Pass region down into the Mojave Desert, the scale of which I found to be unfathomable. On and on in all directions. 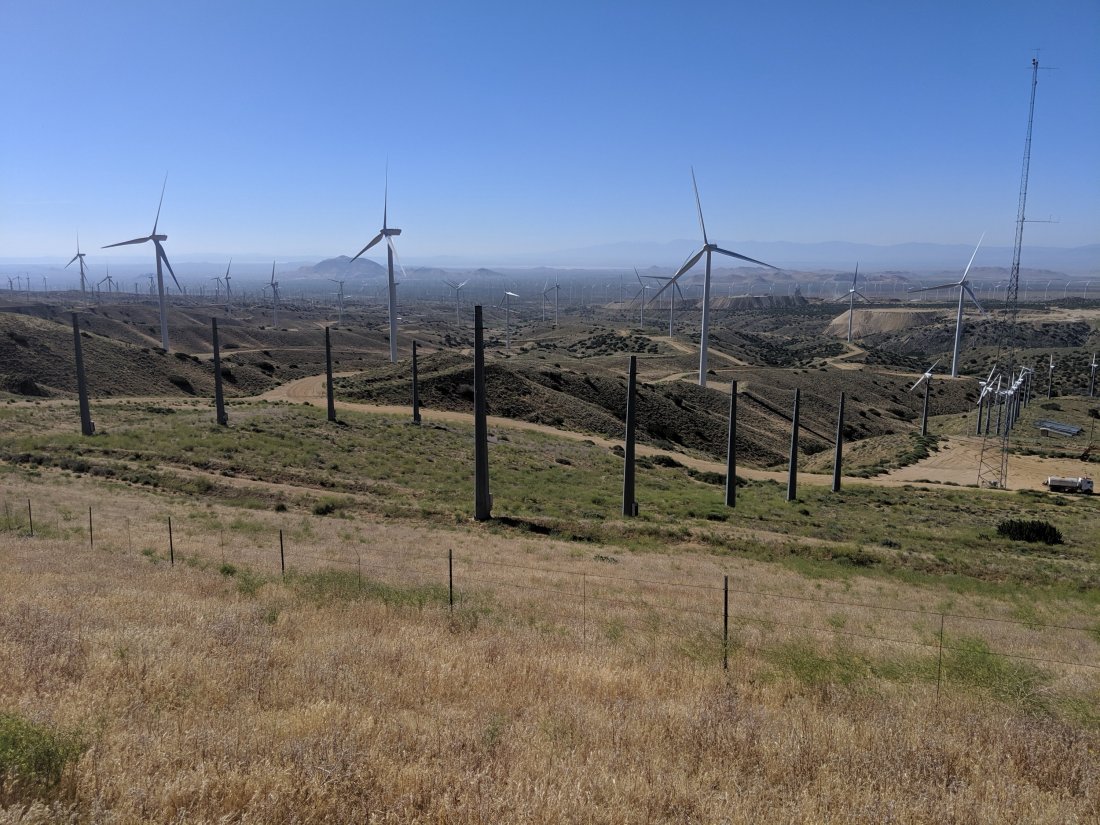 After these eight miles, I got a bus into Tehachapi, an annoyingly pedestrian-unfriendly town on Hwy 58 between Bakersfield and Mojave. Definitely the least hiker-centric town I’ve encountered thus far. Many many hikers are staying at the Best Western in town, and we had a big party in the hot tub and pool area, which was good fun, if a bit rowdy.I’ve spent all of Day 37 in Tehachapi as well, as my third full zero day of the trail. I’m feeling a bit restless being here, given that I’ve already spent a lot of time hanging out at houses lately, but Shea and Machine both wanted a day off and I don’t want to lose them with the snowy Sierras just on the horizon, and an extra day to let snow melt can’t hurt.Over the next few days, we’ll be hiking through the southernmost reaches of the Sierras, at least according to geologists’ definition of that range. The elevation remains low-ish here (below 6,000 feet mostly) and it is hot and dry, so practically speaking we are still in the desert. Still, there’s something satisfying about starting the gradual ascent out of the desert and into the high peaks which I anticipate will be the highlight of the entire trip.