Highlights: Friends joining me on the trail; Seeing Chris again; Weather not quite as miserable as I expected; Return to feeling of remoteness.

Lowlights: Cold, rainy weather; Mt Rainier hidden by clouds when the trail passed right next to it; Nightly siege by the mice; Toes rubbed raw by too many days in wet socks.

Leaving White Pass on Day 131, I had four days to get to Snoqualmie where I had a rendezvous with three friends who are joining for a few days thereafter, as well as a few others coming up from Seattle just for the evening. It’s a 98 mile stretch between the passes, so shouldn’t ordinarily be difficult since 25-mile days are pretty standard for me at the moment. However, rain/showers were forecasted for all of those days, and I didn’t know how much that would affect things.

After a cup of coffee at White Pass, I hit the trail around 9:30. That morning was pretty miserable – cold, rainy, muddy, uphill. At that point, I had about 350 miles remaining on the trail, but even though I knew the weather was temporary, it may as well have been a million miles.

The upside was that I ran into my original hiking partner, Chris AKA Project Runway, hiking southbound around 11:45. We pitched up the fly of my tent to take shelter from the rain, and stopped for lunch. A few weeks ago, he and his group decided that they weren’t going to make it to Canada before the winter hit, so they travelled directly to the northern terminus and started hiking southbound towards Burney, California, the spot from which they had bailed. It looks like they will make it back to Burney, completing their PCT thru-hike, by late October. Although it wasn’t the most relaxing lunch given how cold it was outside, it was still really nice to catch up with him.

The weather was better for the rest of that day and for most of the next day, but I didn’t take too many pictures because there wasn’t much to photograph given the low visibility. This is kind of a shame, because this part of the trail is the closest to Mount Rainier, the tallest mountain in the Cascade Range. I’ve seen Mount Rainier from a distance on this trip and others, but I was really hoping to get an up-close view of it for the first time in my life. Some of my favorite views in recent weeks have been these up-close perspectives on the large volcanoes of the Pacific Northwest, especially Mount Adams and Mount Jefferson, why are you basically have to move your head up and down to see the entire mountain and you can pick out the individual crevasses on the glaciers. As the largest of these, I feel like the view of Rainier would have even exceeded the views of previous mountains, but Mother Nature decided that was not to be. I guess that’s just life in Washington. 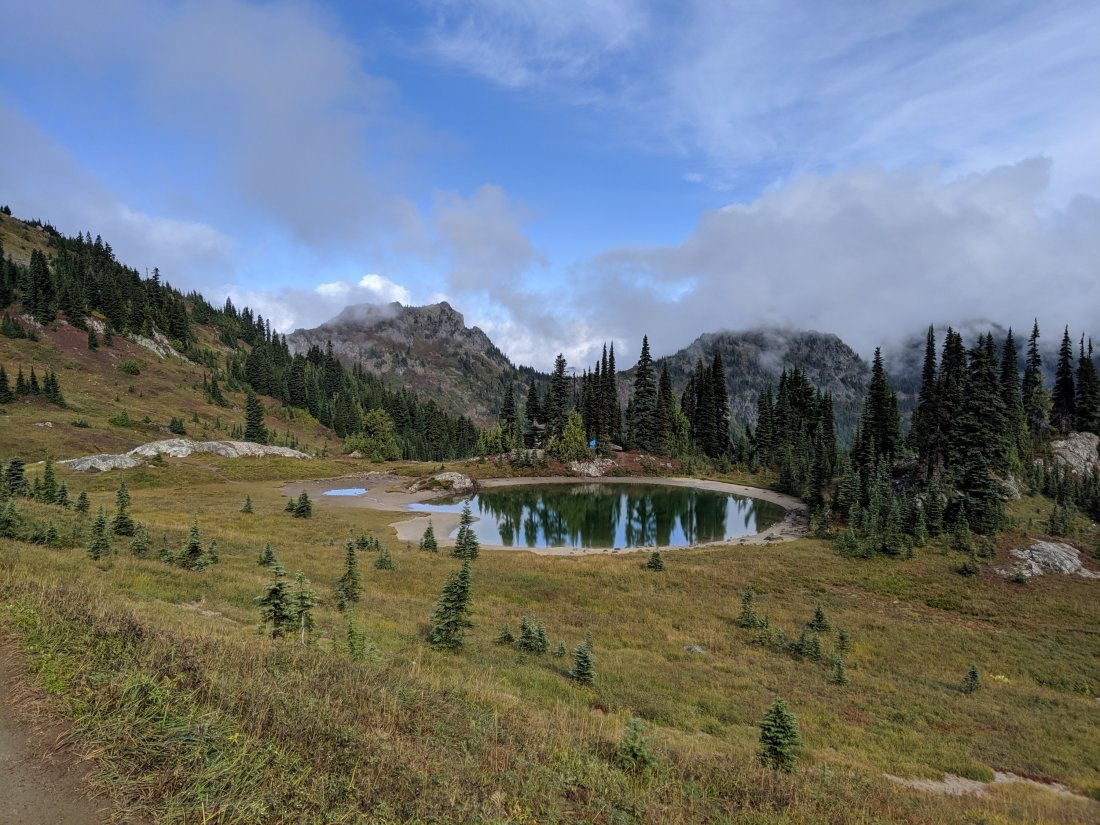 On the first night out of White Pass, I awoke in the middle of the night to the sound of a mouse running back and forth inside my tent. In a panic, I opened the door to my tent and hustled the mouse out if there, which was actually not that hard because I don’t think it wanted it to be there any more than I did once it realized there was a human. My tent had been fully zipped up, so I ascertained that the mouse must have chewed a hole into the mesh of my tent and entered that way. Sure enough, I spotted a hole about 1 inch in diameter just to the left of where I sleep. I don’t think that it chewed anything inside my tent, but the hole is annoying, and it’s really disconcerting to feel like the outside world can get into what is supposed to be the shelter from it. It was difficult to fall back asleep, because it turns out that the the pitter-patter sound of rain on the rain fly sounds a lot like the pitter-patter sound of a mouse’s feet, and I was certain that that mouse was going to try to re-enter the establishment. Fortunately it did not.

The next day out of White Pass (Day 132), I spent the night in a hut near a meadow, called the Mike Ulrich cabin. Being the middle of a storm, most hikers within half a day of me seem to have increased or decreased their usual mileage to make it to the shelter by nightfall. It was a nice spot with a wood stove for drying clothes, tents, etc, but a bit crowded. I snagged a spot by the wood stove. I really should have known better, but the mice were rampant that night. While I did hang my food bag on a wall hook, I didn’t really close it up, and the mice chewed at my tortillas, cheese, and a Snickers bar. I had to do some serious trimming the next day to remove the contaminated bits. Even more annoying, they chewed off the pompom end of one of the straps on my fuzzy warm hat. No nutritional value, but I guess the mice don’t care.

Day 133 was supposed to be the worst day of the storm, with my forecast from White Pass a few days earlier calling for 9C / 48F with rain. The rain was pleasantly sporadic for most of the day, only picking up steadily in the evening, so I feel like I dodged a bullet there. That said, another hiker accidentally took one of my socks from the cabin, so I had to go three straight days in one pair of wet socks, rubbing the skin on my toes totally raw by the time I arrived in Snoqualmie and tracked down my other pair of socks.

In Snoqualmie Pass, I was joined for drinks by several friends from Seattle, who came up after their respective work days to a brewery on the pass. I also had three friends I know from London join me for the next four days of hiking: David and Bernat (my current housemate) came in from London; while Lauri came from Austin, TX, where he is currently a PhD student.

I had had friends join me for drinks at a brewery in Cascade Locks outside of Portland, and then here outside of Seattle, so I feel like I’ve made the most of the Pacific Northwest in terms of catching up with friends living in the biggest cities.

After a pancake breakfast on Snoqualmie Pass, the four of us headed out to the trail by around 11am. In direct contrast to the previous section, the hiking was immediately strenuous, with a c. 3,000 foot climb right out of the pass. The climbs got a bit shorter over the next few days, but still very little was flat – lots of sharp ascents followed by sharp descents.

On the plus side, the weather largely cleared up, so I no longer felt like a drowned rat, and my friends didn’t have to experience the less pleasant side of Washington hiking. In addition, the views were some of the best in Washington so far, with lots of deep glacial valleys, and a sense that we were in locations inaccessible in less than a day’s walk (a first for me since the High Sierra). After a difficult first night being forced to camp on overgrown slopes (due to a dearth of available sites as the sun went down), we had a couple of very lovely campsites next to lakes. 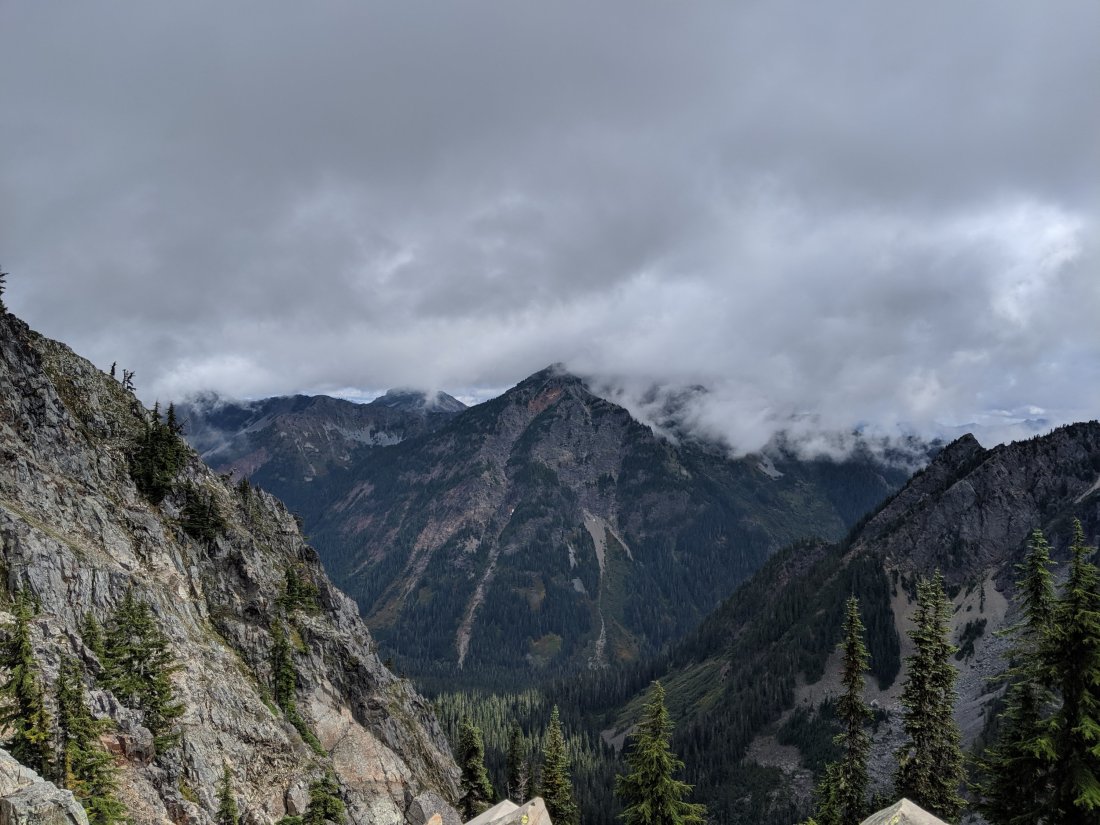 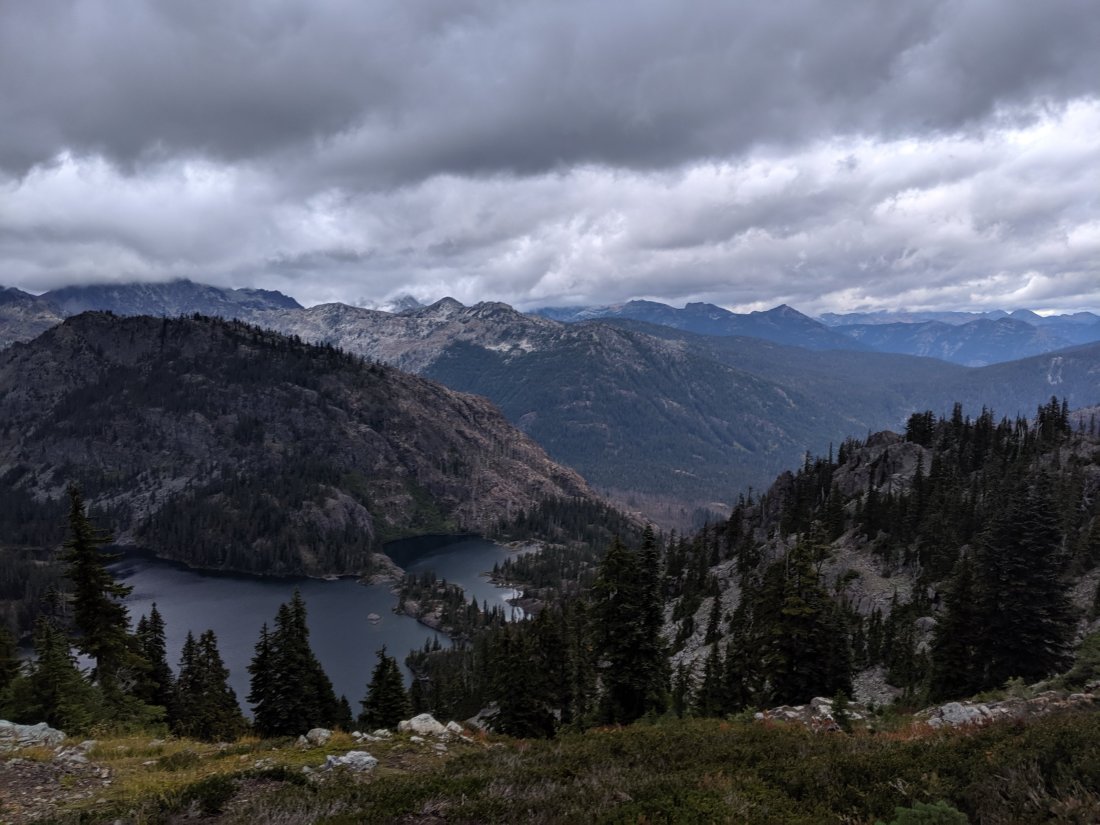 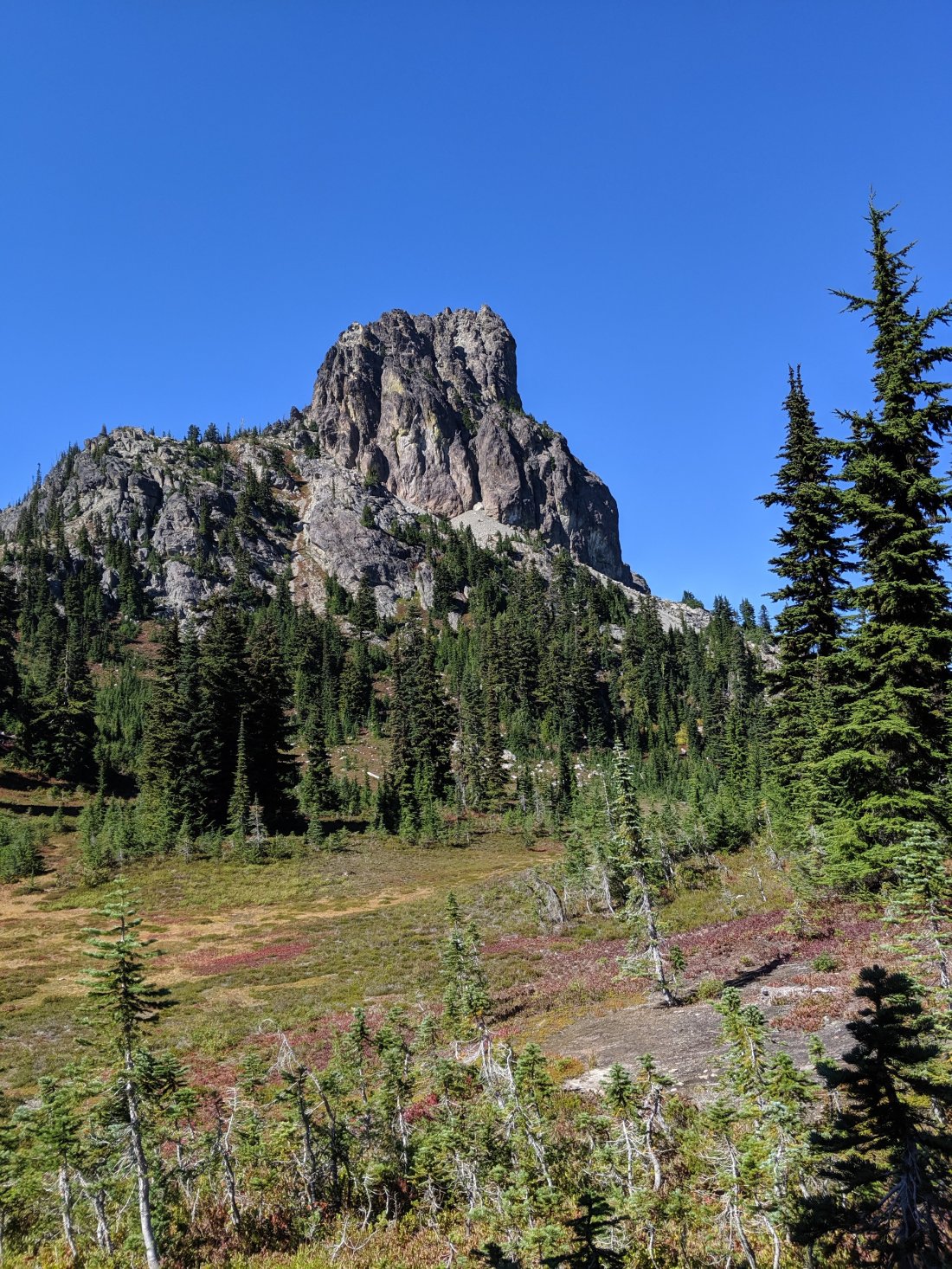 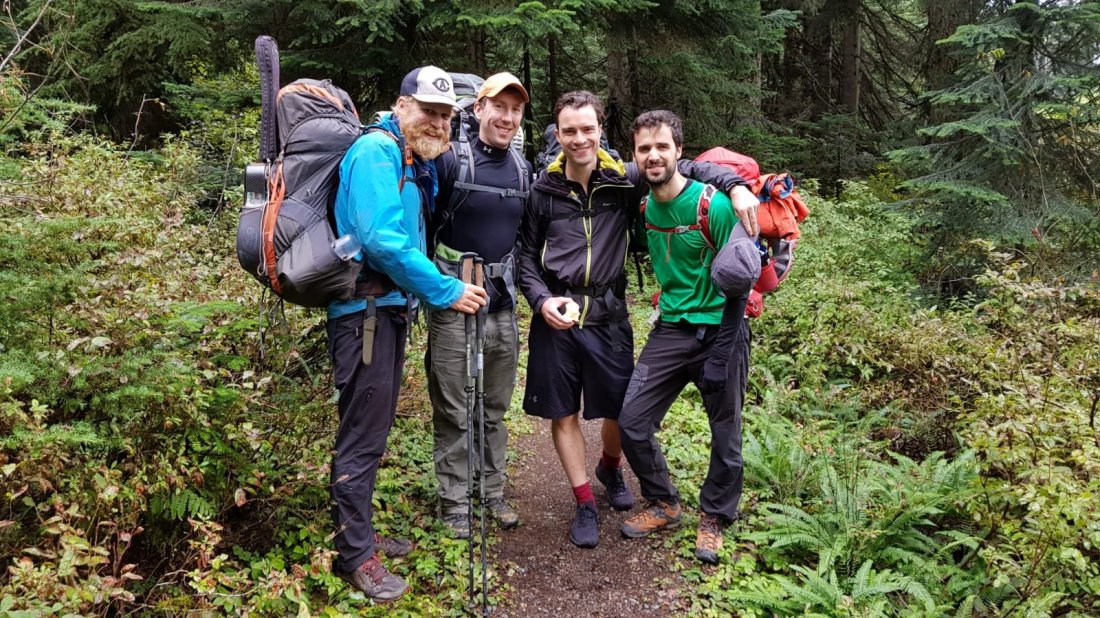 I would ordinarily have hiked this section in three days, but with relatively greener legs in the group, we split it into four days of around 18 miles each. With the shift to more challenging terrain, it would have been a real struggle to do it any quicker. The guys hiked admirably and spirits generally remained high throughout.

As it has been during each of the sections with external company, it was a pleasure to share my lifestyle with the outside world. With Bernat, David, and Lauri specifically, they were three of the five people who joined me for my first real overnight backpacking trip last summer in Northern California, which made it especially special to share the (nearly) end of this journey. The other two people from that trip, my brother Torsten and my buddy Étienne, joined for a few days each in Southern California and Southern Oregon, respectively, so now the whole gang has come along for sections of this hike. Obviously awesome to share my experience with good friends, but equally awesome to catch up with them and be reminded of life back in the outside world: I spend a lot of time in London with Bernat and David, and see Lauri pretty frequently around North America and Europe.

On Day 138, we made it to the end of their hike, at Stevens Pass. We then headed to the town of Leavenworth, about 30-40 minutes’ drive east. For some unknown reason (unknown to me, at least), Leavenworth has decided to theme itself entirely as a Bavarian village, to the point that even Subway looks like it’s wearing Lederhosen, and they have a literal nutcracker museum. A bit of an odd concept, but I really enjoy Bavaria, and it was kind of a kick to see a bit of it placed in the middle of America. Sadly, despite being the third weekend of September, the first weekend of Oktoberfest in Munich, Leavenworth celebrates Oktoberfest only in October. I will be writing a stern letter to the tourism board in due course expressing my deep displeasure. 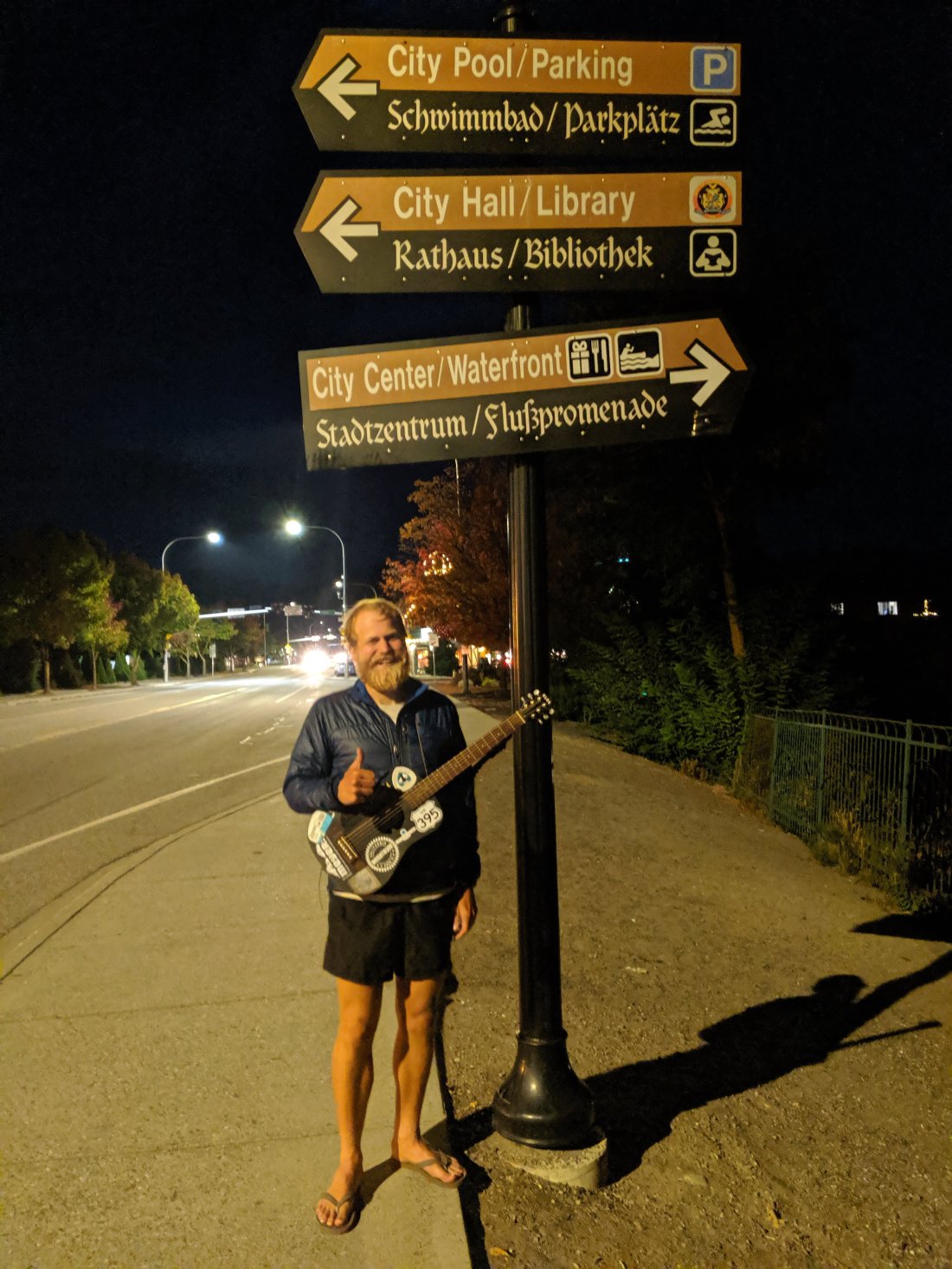 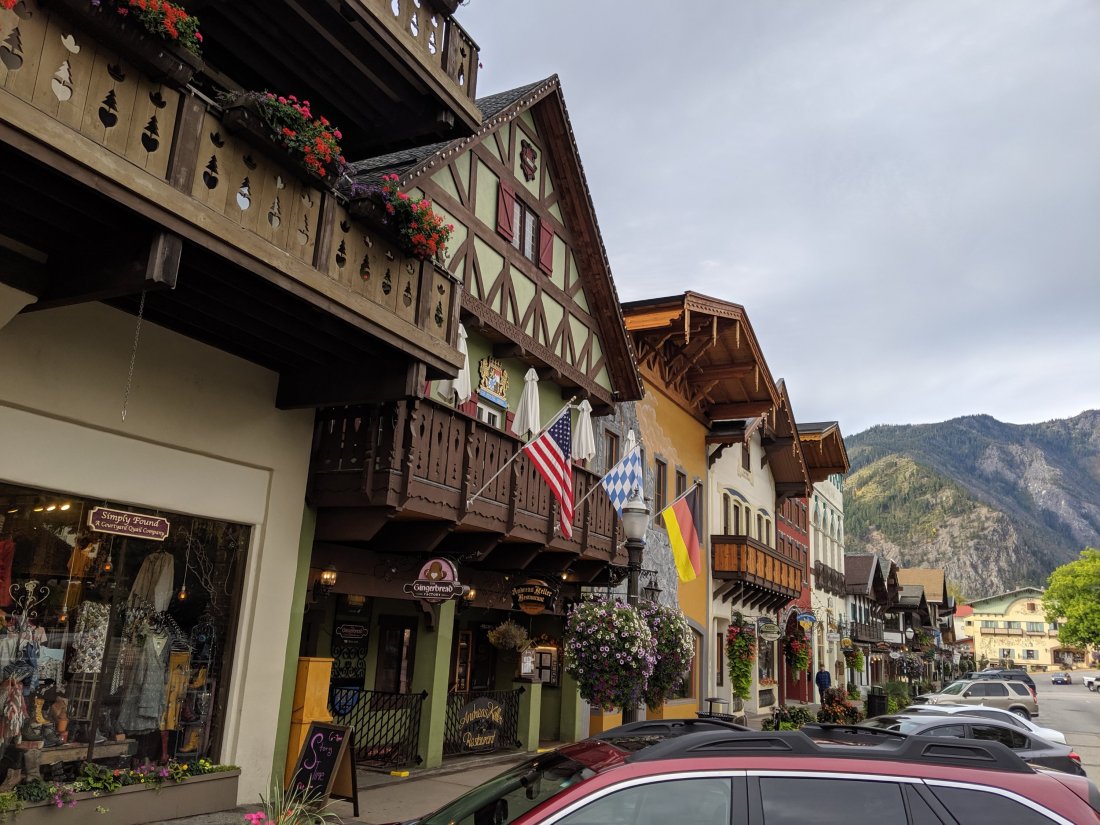 The next day, my buddies drove me back up to Stevens Pass, where I sit now. It’ll be 8 or 9 days to the end of the trail, during which I expect not to have any cell service, so this will probably be the last you hear from me from the trail.

So with that said, I’ll see you on the other side!