Our morning started relatively early, and we left my friend Lauren’s house in San Diego around 8:30. After a long hearty breakfast in El Cajon, we made it to the border monument a bit before noon. (Huge thanks to my sister Katya for driving us down and being really good company at that).We took some customary border photographs:(Chris and me)

(Staring through the fence into Mexico.)

(Staring at Canada in the distance) 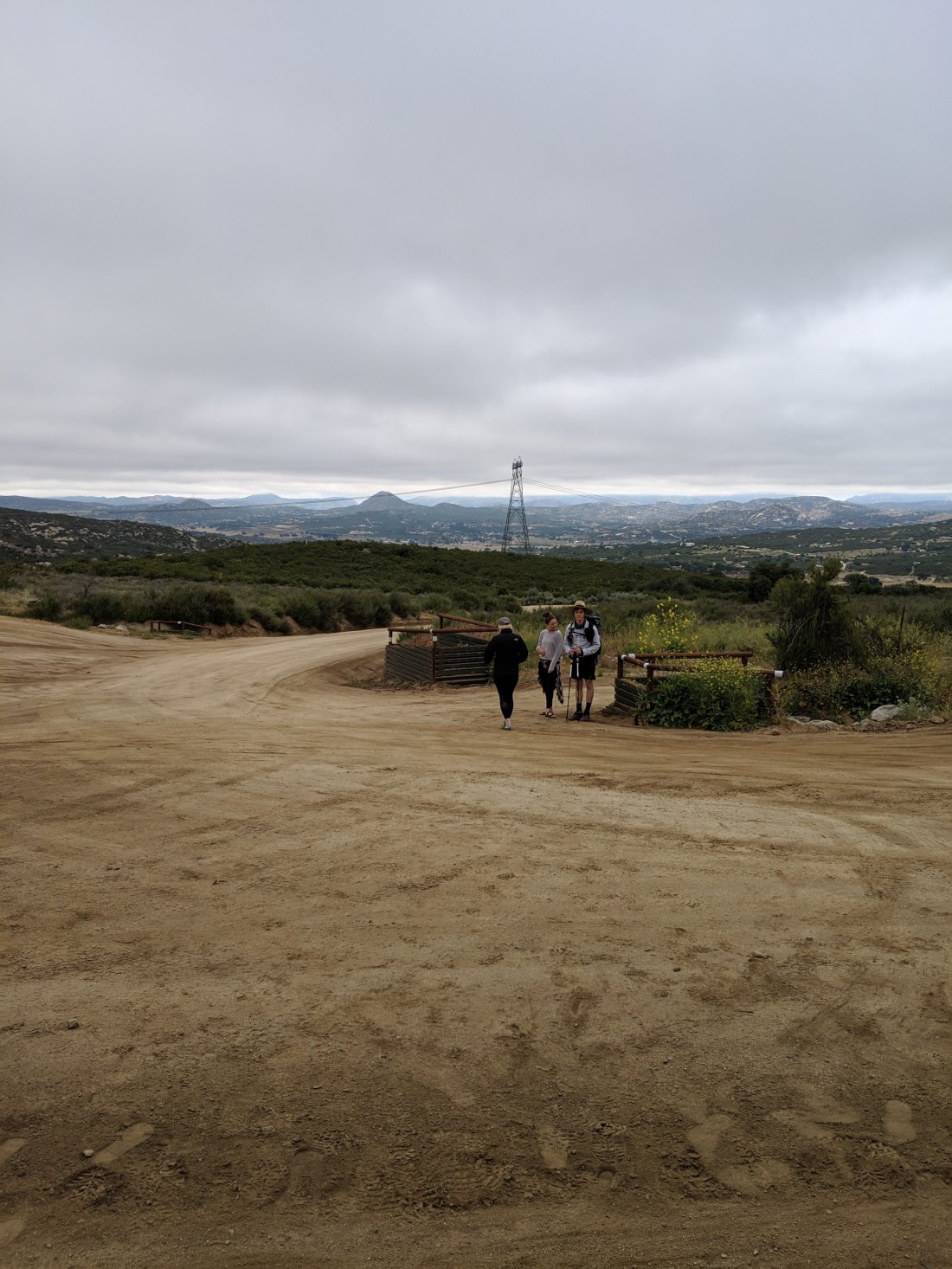 The first few miles were relatively flat and meandered around near the border. Got captured and tied up to the railroad tracks by one Snidely Whiplash, but was saved in the nick of time by my Dudley Doright.(Little progress, much left to do). 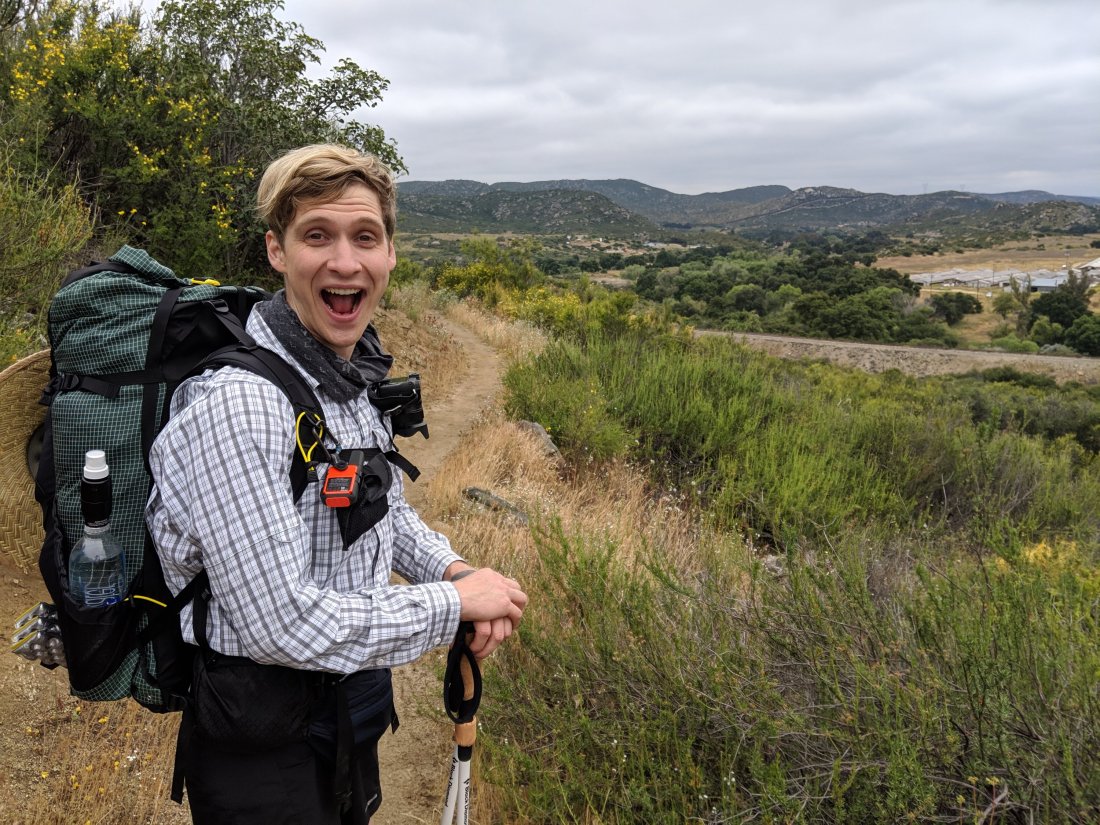 The trail then turned north and began heading into the Laguna Mountains. The weather all day (and all week, I hear) was cool and foggy, making it feel more like a summer day in the western half of San Francisco than something which is called “desert”. That was a real boon, as I was worried about the harsh transition to both a strenuous lifestyle and baking heat. The latter will come before long, but hopefully I’ll be on board with the former by that point.Flora is a mix of some bushes, small cacti, some super rad ancient manzanitas, petrified forest. 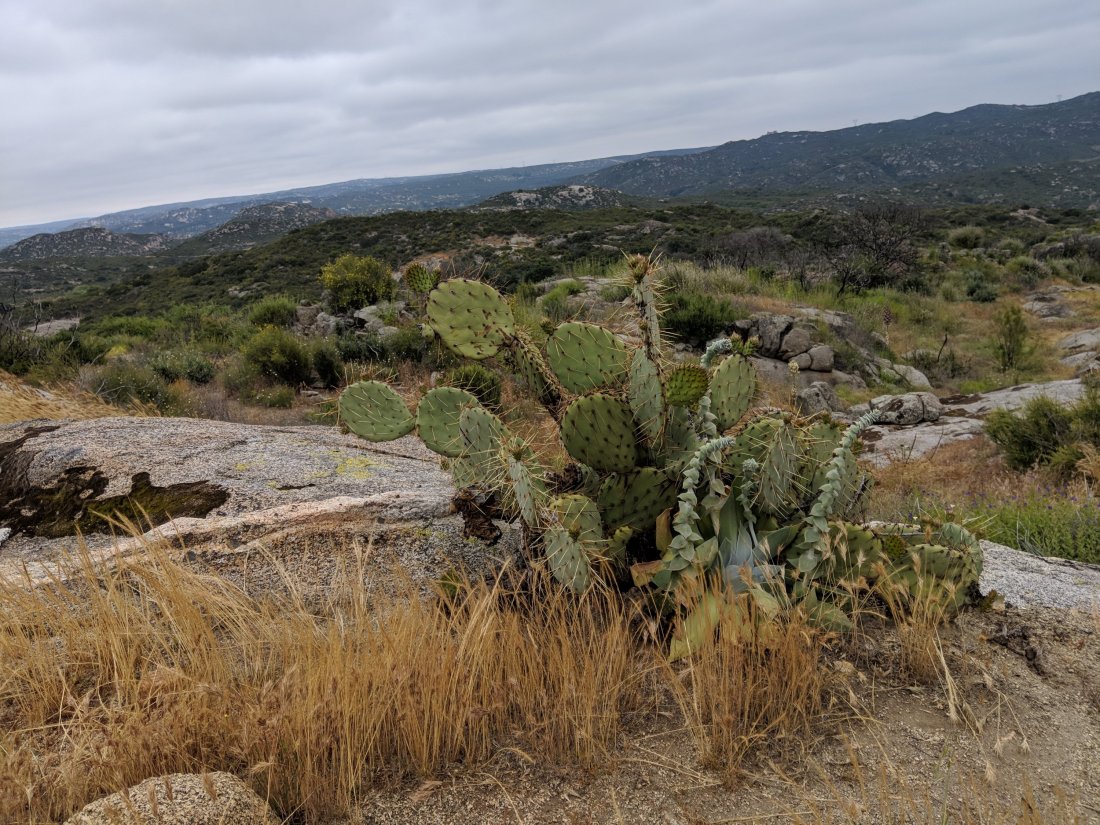 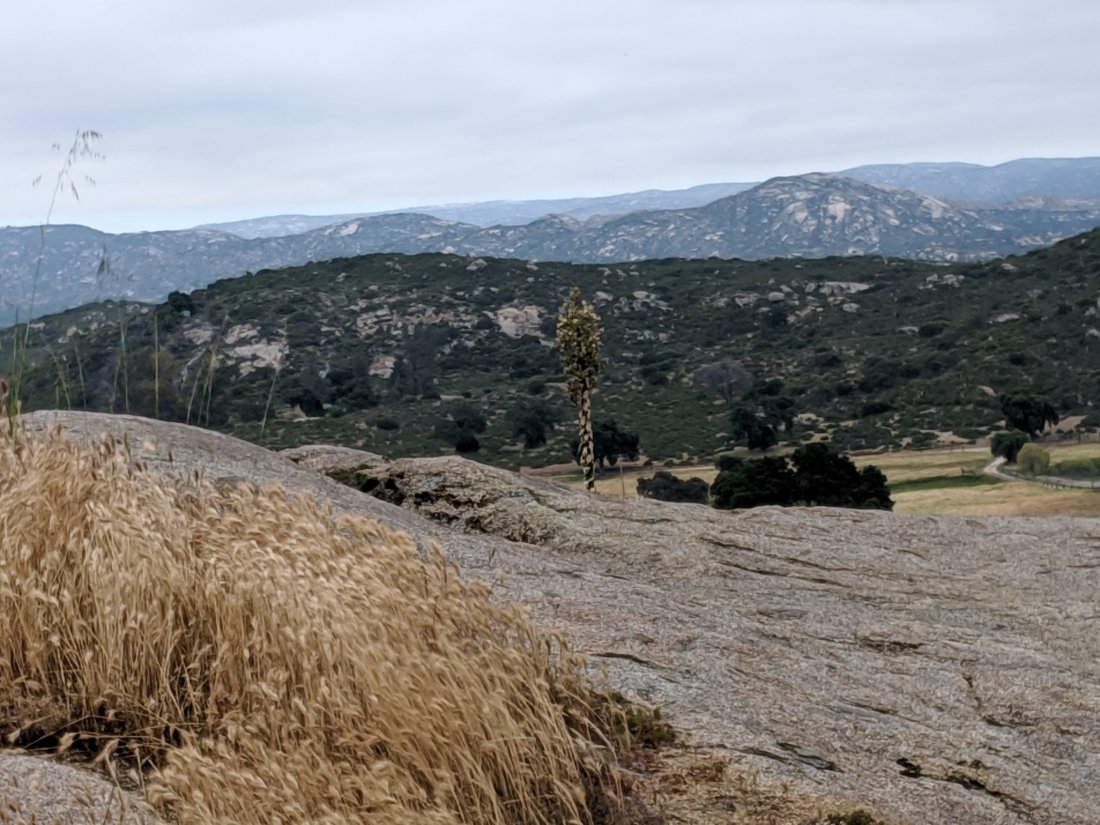 Fauna so far includes some funky looking bugs. Cold weather meant the rattlers were nowhere to be seen. I did get a bit of a fright coming around a corner to see a skunk baring its teeth at me. Fortunately it scurried off instead of ruining my day/week.(A beetle) 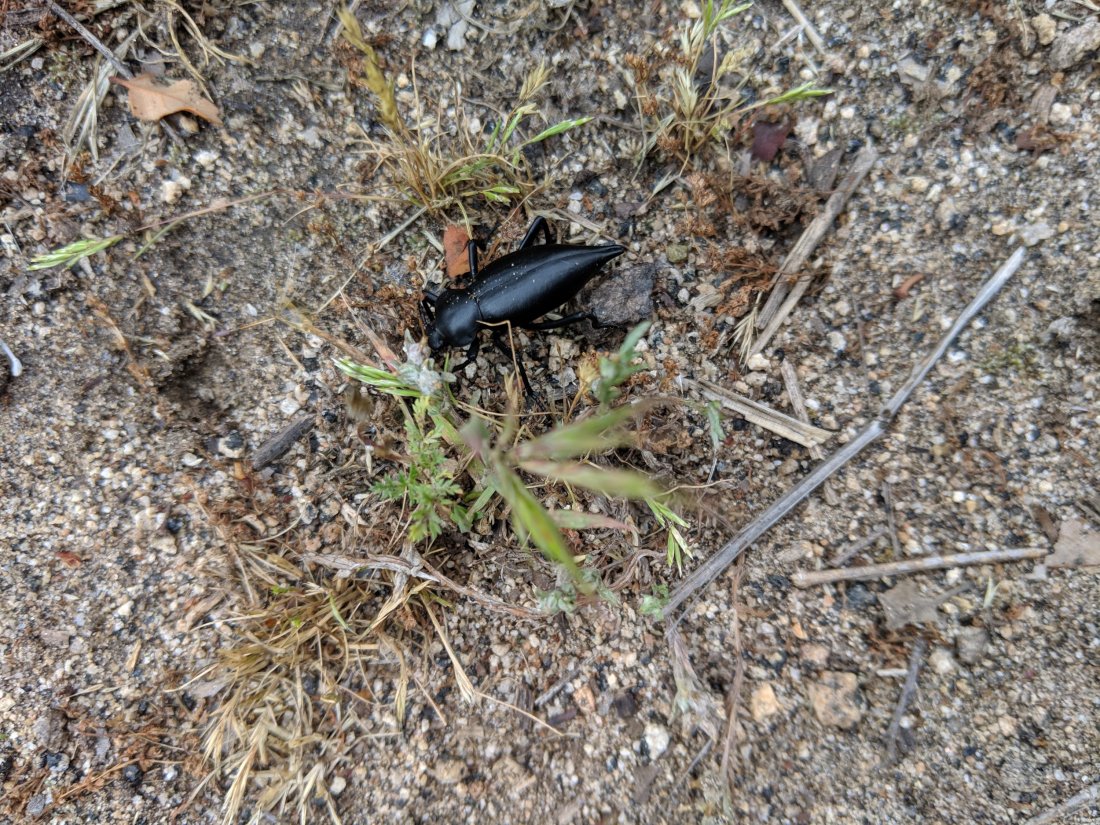 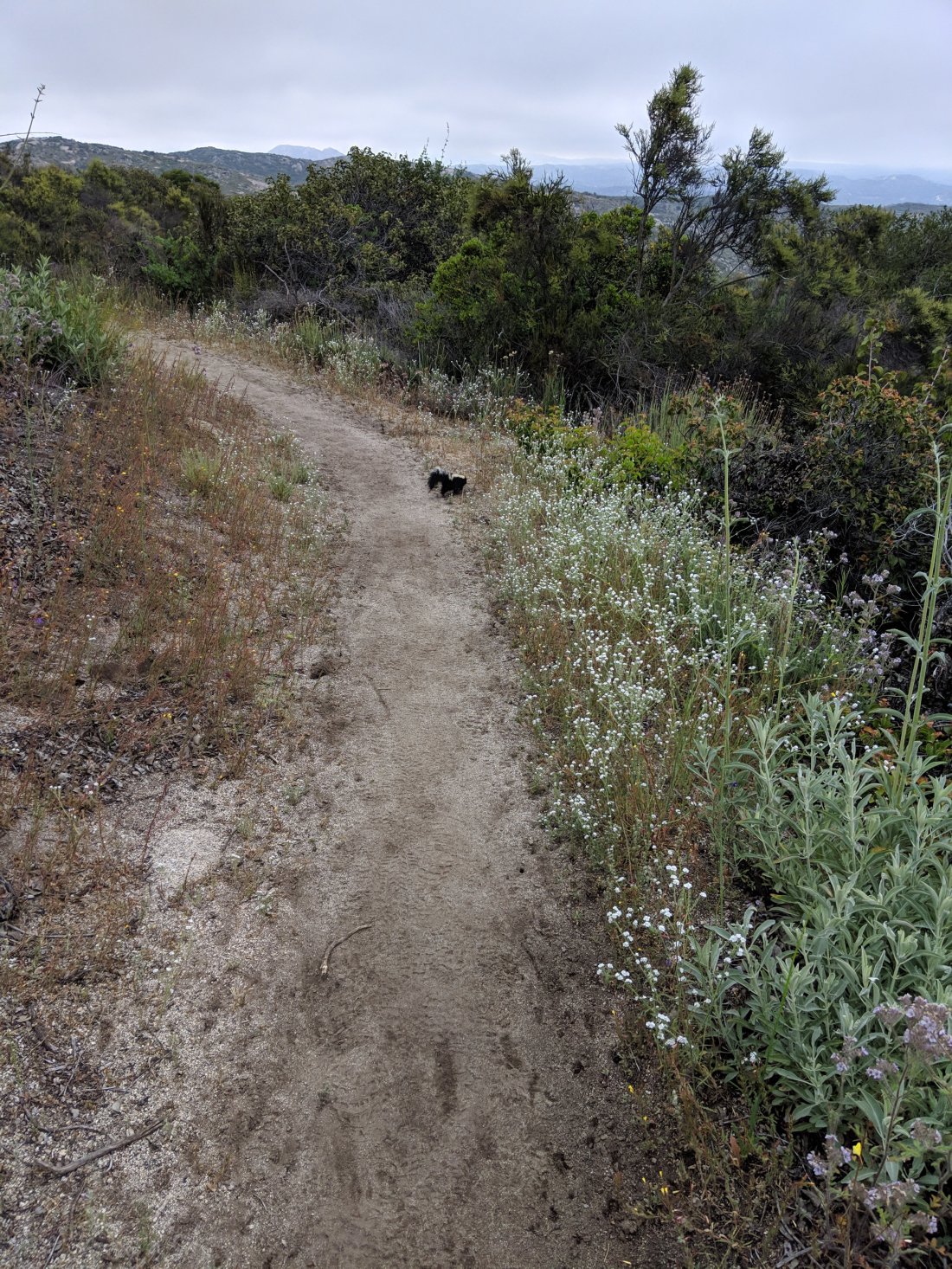 At the end of the day, we descended into Hauser Canyon, which has a little creek running through it. Chris wanted to go a little slower to ease the strain on his knees, so I scurried ahead to make camp and cook his food. I was feeling pretty good and wanted to see what a 3 mph pace feels like, so I basically power-walked the last 4.5 miles and let my body run short downhills. In retrospect, I probably shouldn’t have done that, as my left shoulder is pretty sore now from the repeated bouncing of a heavy backpack. Shouldn’t be a problem long term, as my pack will only get lighter, but I’ll need to be a bit more careful over the next few days.There’s a pretty good sized crowd here hanging out, including a dude Nate (?) with a mandolin, so I played with him a bit and chatted with some of the others. Judging from accents, of the maybe 10 people in our immediate campsite, there are probably 8 Americans, including 2 southerners, 1 Canadian (not including me), and one German-speaker. We’ll presumably cross paths again, but there are countless people still to meet, so who knows who will stick.For now (and “now” is now Thursday morning), it’s time to pack up and hit this climb out of Hauser. I’m told there are breakfast burritos at Lake Morena a few miles down the track, so we’ll probably hold off on eating until then. Today will probably be another short day (10-15) miles, but with all day to do it, so should let both of us recover from the stresses of day one.