Day 12: Hanging out in Idyllwild

Highlights: Most beautiful bit stretch of hiking thus far; Zero-day in a town that has a dog as a mayor.

Given the inclement weather recently and knowledge of an incoming storm the next day, the group that stayed at Paradise Valley Cafe the night before decided we would push to close to Idyllwild the next day so that we could arrive early on Day 12 before the weather turned bad. Additionally, due to the exposed nature of most of the hiking between those spots, it was necessary to make it to within about five miles of Idyllwild to find a campsite that was safe in a storm, which meant at least 25 miles of hiking, right on the back of a 26 mile day the previous day.

We all got breakfast at Paradise Valley Cafe, so didn’t get on the trail until close to 10. In order to make 25 miles, that would mean hiking until at least 6 pm, assuming a pace of 3 mph (which is pretty quick), and no breaks. I resigned myself to hiking after dark, but that seemed preferable to hiking exposed ridges in a big storm.

I started a bit slowly, because I was somewhat dejected by the requirement to do a second big day in a row, and also because the hike was mostly uphill into a sub-alpine ecological zone.

At some point I ran into Barry, the Irish guy who I’d eaten dinner with the night before. We both independently suggested trying to hike all the way to Idyllwild that night, since we’d be getting so close anyway. That would mean hiking until at least 9:30, if we walked quickly, but it again seemed better than being up a mountain in a storm.

The hiking was epic for the rest of the day, but definitely not conducive with moving quickly. We traversed a series of knife-edge north-south ridges separating the Inland Empire from the Coachella Valley, with steep climbs in and out of the low saddle points, heavy winds blowing from the seaward direction, and awesome views down in each direction.

Progress was slow, but we eventually got off the ridge section (about 22 miles in) just before sunset.

After sunset we were more protected from the wind, and also I got a couple of epic pictures of Palm Springs with a full moon. Can’t decide which is my favorite. 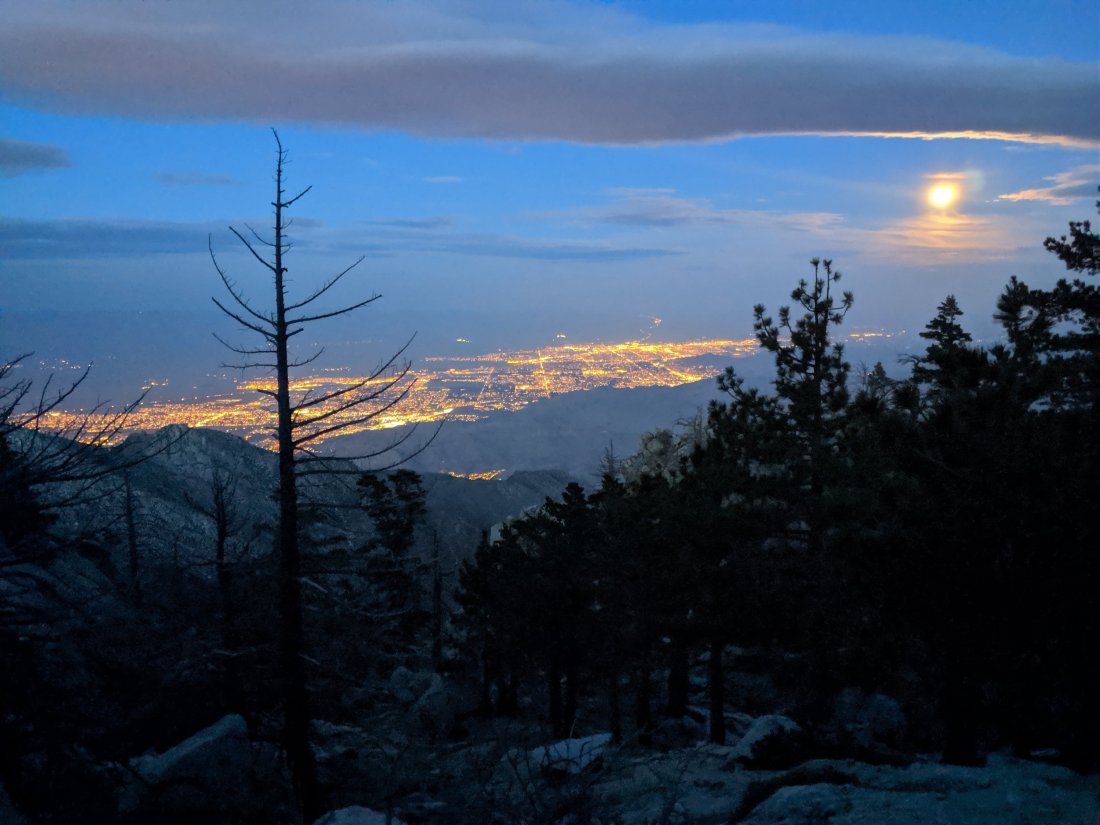 Eventually, just before descending into Idyllwild around 9:30, we ran into one of Barry’s friends who had done an evening hike of San Jacinto Peak with his group. This was a very fortuitous encounter as they had floor space and a ride arranged at the trailhead.

We descended the last 2.5-3 miles down about 3,000 feet to the parking lot, where a trail angel Roland was there to drive us to this little cottage in Idyllwild. He even stopped at a restaurant so we could get takeout food.

In retrospect, it was definitely the right decision to push through into the night. The people who camped out up the mountain got caught in snow this morning, and somebody got treated for hypothermia. Others turned back, which means that, in addition to wasting energy not making it through the section, they have to choose to either skip this section (which means finishing out of order or not doing the full trail) or wait for about four days for the next window of sufficiently good weather to make it through. Meanwhile, tomorrow’s weather is supposed to be good enough that I can push through the last stretch of the San Jacinto mountains before I descend towards I-10. I think there’s enough ice and snow on the ground that I’m going to skip the alternative loop which goes to the top of San Jacinto Peak, which is a bit disappointing, but hardly an existential threat to my plans.

I spent Day 12 in the little town of Idyllwild, doing my first “zero” – i.e. zero miles. I’ve done two “nearos” of 5 miles each, but this is the first day in about 2 weeks that I haven’t hiked at all.

I have three errands to run while I’m here: (1) buy enough food to last the next 5-6 days to Big Bear; (2) pick up a package from the post office of things I left behind in Julian which Chris has kindly shipped on for me; and (3) visit the laundromat. I did (1) already, but the post office isn’t open on Sundays, so I’m going to hit the laundromat and post office tomorrow morning before heading out.

Idyllwild is a cute, idyllic mountain town comprising mainly of refugees from the flatlands and second home owners. They love hikers here: Our trail angel from last night is retired and spends his days driving around hikers at almost all hours of the day, and accepts no money in exchange; I was offered a hitch earlier today when I wasn’t even sticking out a thumb (I declined as I was nearly home). 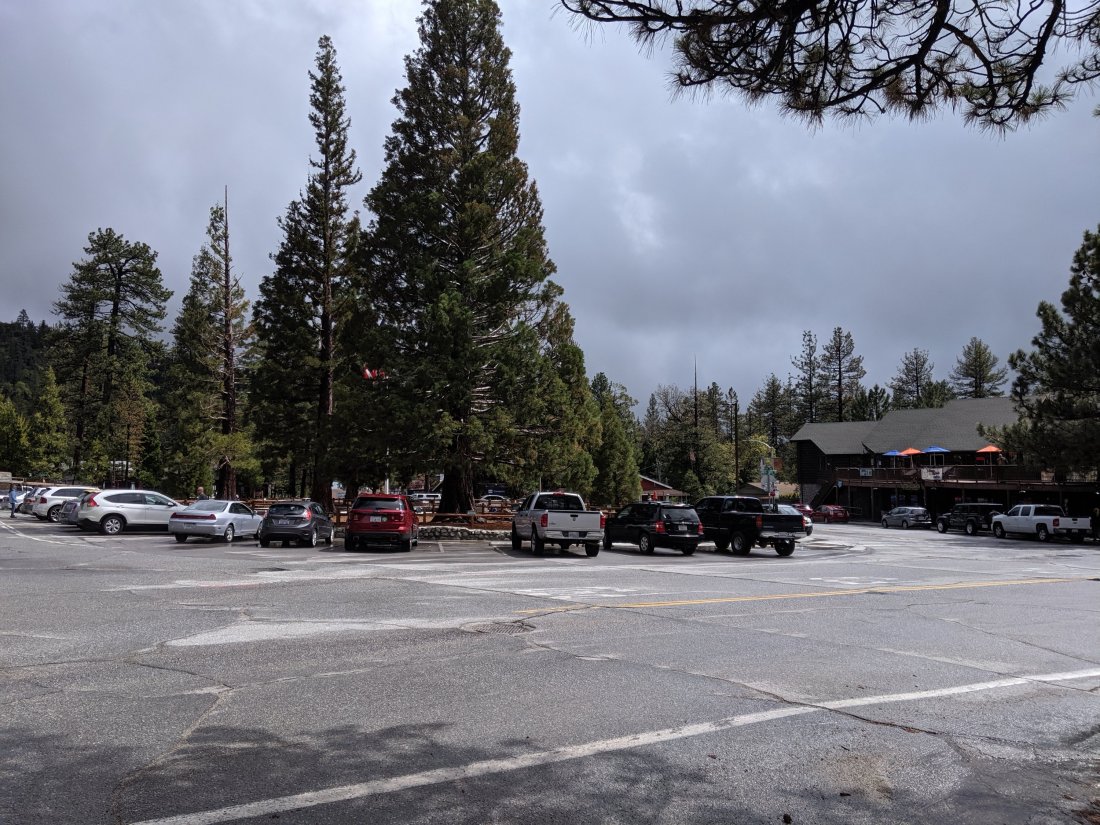 However, the town’s real claim to fame is its mayor, Maximus Mighty-dog Mueller II, aka Mayor Max. Unlike most mayors, Max is a dog, specifically a golden retriever who just had his 6th birthday party yesterday, with free food for everyone around. I sadly was bashing 30 miles, but I got to meet him earlier today during his office hours. 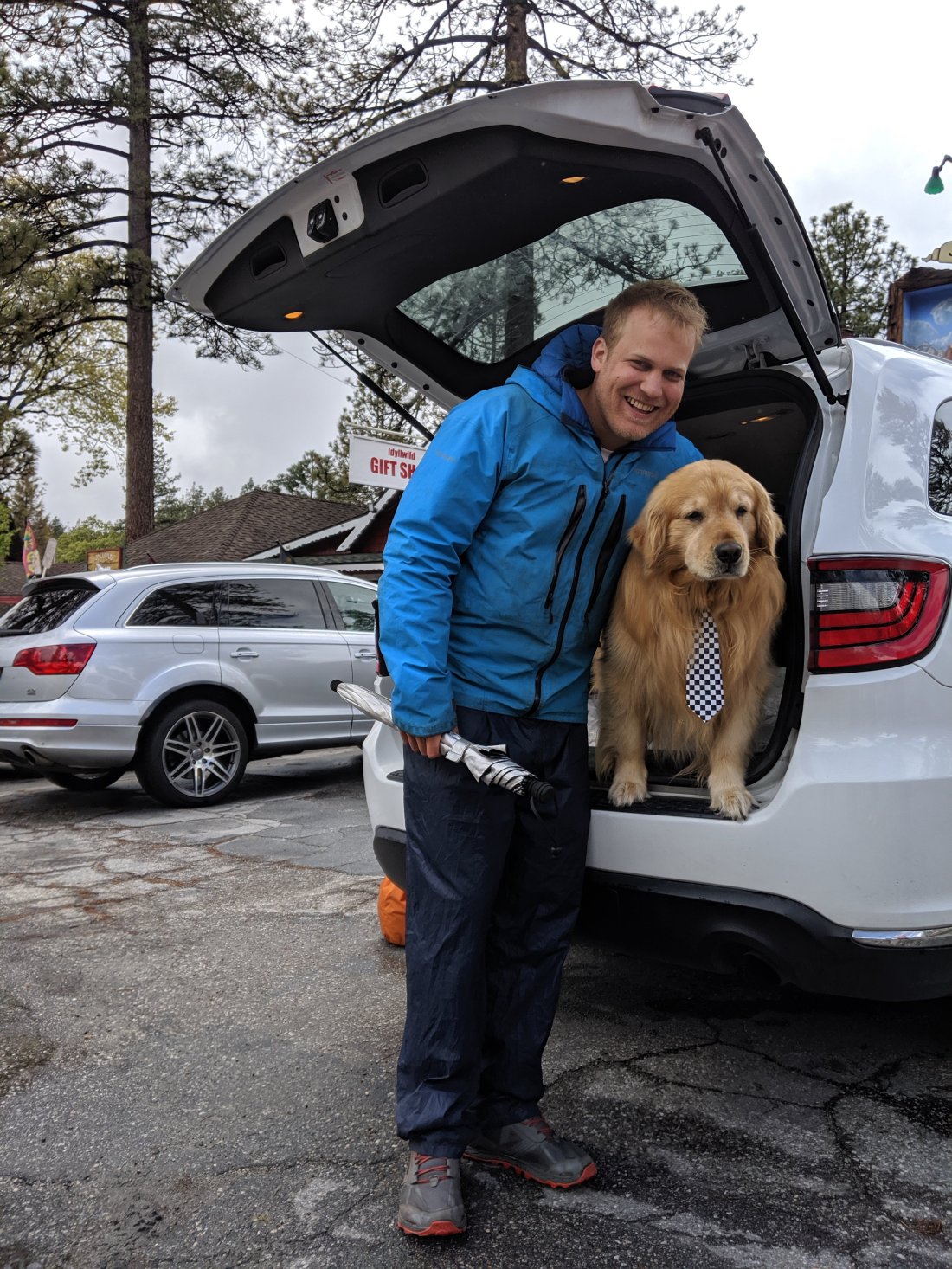 As I understand it, Max is Idyllwild’s second-ever mayor, the first being his uncle Max I. With a population of about 3,000, I guess they never needed a human mayor.

Max has tens of thousands of followers on social media, including Barry, who was a follower before he’d even heard of the PCT.

Tomorrow, I’m going to finish my errands and head back up to finish the San Jacinto mountains, then brieflydown into the lowlands. With any luck, the inclement weather will mean it’s relatively cooler down below.