Highlights: Grinding through some serious miles on sometimes difficult terrain, and getting closer to the end of the southbound portion; Nothing was especially sketchy; Southernmost part is easy hiking with awesome views; Crossed paths with most of the people I had been around before I bailed; Hiking with my friend Marissa.

Lowlights: Northernmost part had a ton of elevation gain and loss but without ever reaching any grand vistas; Aside from the day with Marissa, haven’t been able to have more than a 5-minute conversation with anybody; mosquitos; guitar is slightly broken, making it less fun to play.

I started my day at Kennedy Meadows Resort and Pack Station, known in the PCT community as Kennedy Meadows North to distinguish it from the KM at the southern end of the Sierras.

KM North was one of my favorite places to stay on the trail, because it’s hiker-friendly but not hiker-centric. Rather, most people there tended to be on the “Pack Station” side of things, strutting around in boots, ten-gallon hats, and bushy moustaches. And this makes sense looking out back and seeing a huge array of horses and mules.

Heading out of Sonora Pass, I was a bit apprehensive about the conditions I would be facing. While I was comfortable north of there, Sonora Pass is generally considered to be the northern end of the more challenging High Sierras, and I didn’t know if this would mean that I was again out of my depth.

Fortunately, I knew this would be settled immediately, as some northbound hikers said that the descent into Sonora Pass (i.e. my ascent out of it), was one of the sketchier things they did. It was a pretty long snowy uphill, but never dangerously steep (there was a glissade path down, so I figured the worst case scenario was that I’d slide down that and have to repeat the exercise), so with some diligent step-kicking, I made it up to the top without ever feeling unsteady, which was a big confidence booster.

The remainder of the first day south of Sonora Pass was mostly high ridges, followed by a drop into a canyon, followed by a climb over Dorothy Lake Pass. As I alluded to in my previous post, I passed the 1,000 mile marker, though hadn’t yet hiked 1,000 miles (at the time of posting, I have now hiked about 1,050 miles). 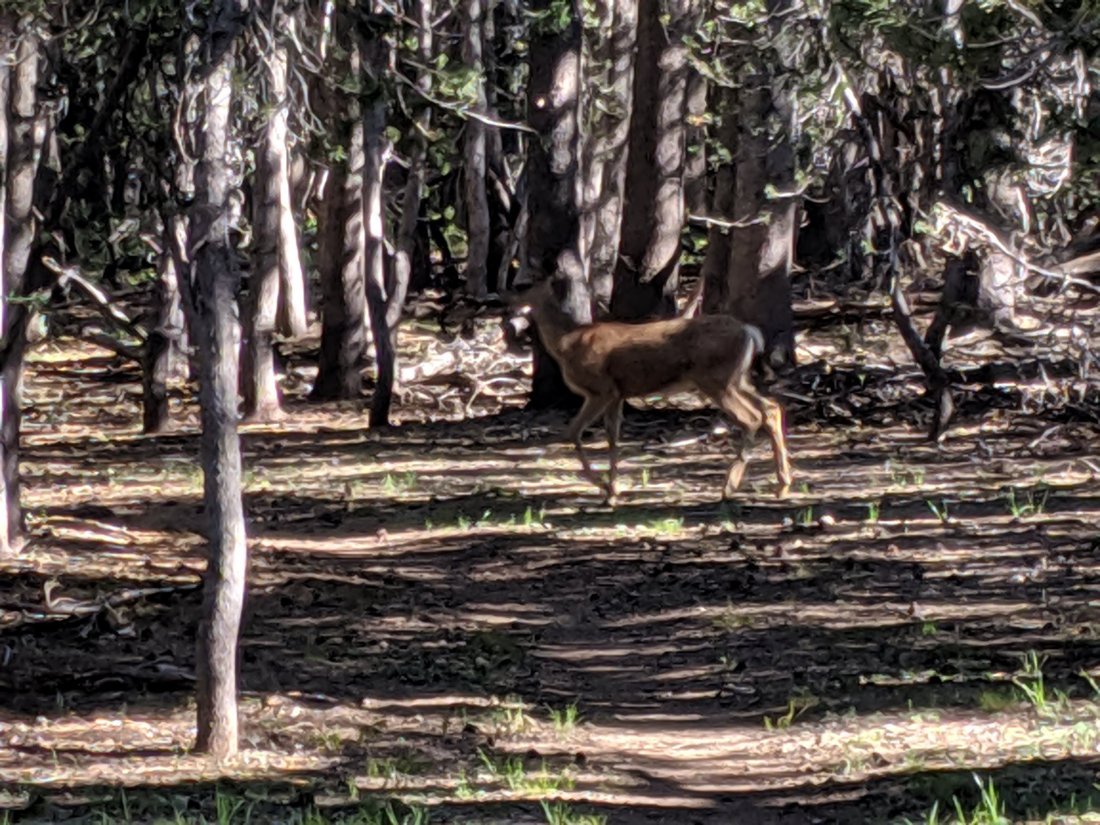 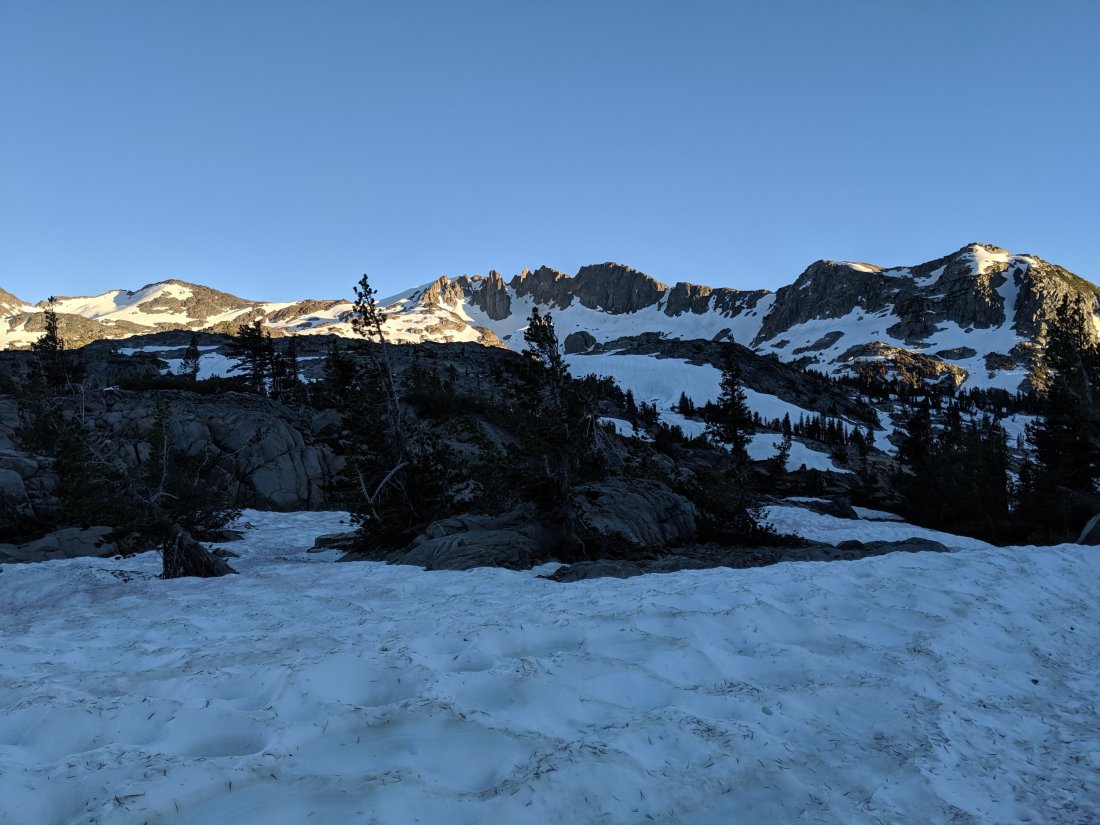 The rest of these three days or so to Tuolomne Meadows were characterized by challenging and thankless hiking – the trail descended into about five canyons only to immediately ascend the other side, with the downhills much too steep to make the uphills worth it. The bottoms of these canyons were also filled with mosquitos. These three days were probably my hardest southbound so far, because I didn’t let the challenging topography slow my daily mileage.

The challenge was broken up by the occasional view of a mountain, lake, or meadow, but these were a little hard to appreciate amid the buzz of the mosquitoes.

At this stage, I also began to cross paths with people I knew who hadn’t flipped north. It was nice to catch up with all of them, but going the opposite direction, I couldn’t really talk to anyone for more than a few minutes before I had to get going again.

Things began to improve markedly from Tuolomne Meadows (the high country of Yosemite National Park) for a few reasons.

First, my college friend Marissa joined me for a day hiking south from Tuolomne Meadows. Known to my UK friends as “Nature Marissa”, she works as an interpretive ranger at (relatively) nearby Sequoia National Park, and so was able to make it to the trail for a day out (and then back the next day without me). It was great to catch up with her and also have my only sustained social interaction in over a week.

Second, the hiking got easier and the views more rewarding. Tuolomne Meadows itself is about a 15 mile stretch of completely flat meadows surrounded by high mountains, and then over the next pass south of there (Donahue Pass) was a very gentle descent into the Middle Fork San Joaquin River with some grand views to the west. 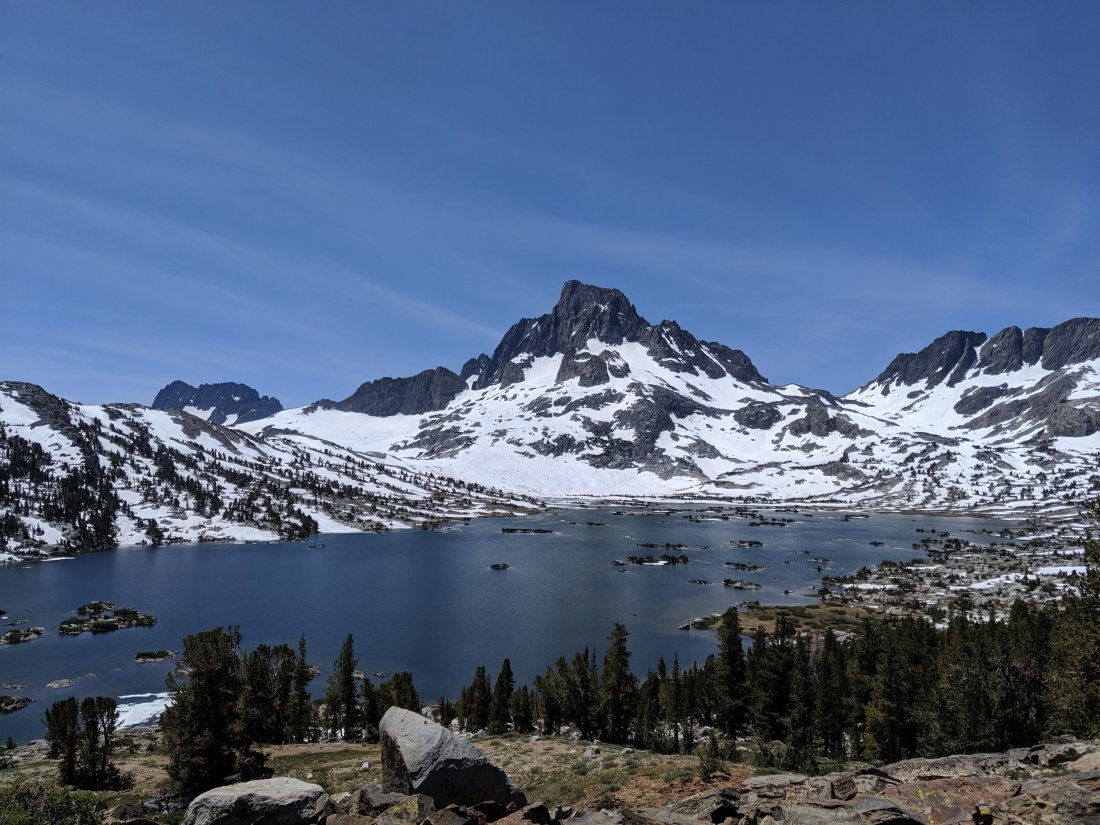 Finally, the lighter terrain allowed me to do my biggest miles in this section, which is a big psychological boost to be now barely over 100 miles from the end of my southbound journey.

On the phone with my friend Clara yesterday, she pointed out that I hadn’t really written anything about my guitar, which I guess is because it’s been kind of a constant thing throughout my journey rather than associated with any one particular section.

Anyway, this bad boy has been on my back since the Mexican border, collecting stickers along the way:

It’s been awesome to have my other favorite activity on hand to entertain myself and others at the end of the day, and my American Pie compilation video is going to be epic (hopefully!) at the end of the journey.

For the time being, though, it’s more chore than fun because one of the tuning pegs broke, so I had to remove a string entirely in order for it not to sound super out of tune. The manufacturer is mailing me a replacement part for it, so I’m excited for it to be fully operational again soon.

I’m about to head out of Mammoth for my last 107 miles southbound. This is the highest part of the trail, and what was directly on my mind when I decided to bail. Sounds like a lot of snow has melted and the rivers have receded, so should be a lot more manageable than what it would have been a few weeks ago. If all goes well, I should be driving back north to Truckee again next Wednesday!