Highlights: Views opening up to large volcanoes after several days of green tunnel; Visiting family and friends in California; Mile numbers align with years of my lifetime.

Lowlights: Volcanic rock sucks to walk across; Heavy pack out of Bend due to added winter gear; Bad news from the outside world which I basically had to process alone.

After spending most of Day 111 at Shelter Cove on Odell Lake lazing around, writing my previous post, charging things, etc, I finally made it out to the trail by 6 or 7 pm, with enough time to hike up the hill out of the lake and camp in darkness between a couple of other lakes a few miles down the trail.

The first couple of days out of Shelter Cove were mostly quite easy, flat, green tunnel hiking, punctuated by bodies of water ranging from small stagnant ponds to really lovely mid-sized lakes, where we generally stopped for lunch. I continued to hike with Zach and Petr from earlier, and we were additionally joined by Ruthless, a girl from Philadelphia who coded for Google in San Francisco until she decided she didn’t want to be a cliché anymore (she’s also very hesitant to say where she worked, which is why I’ve just put her on blast here). 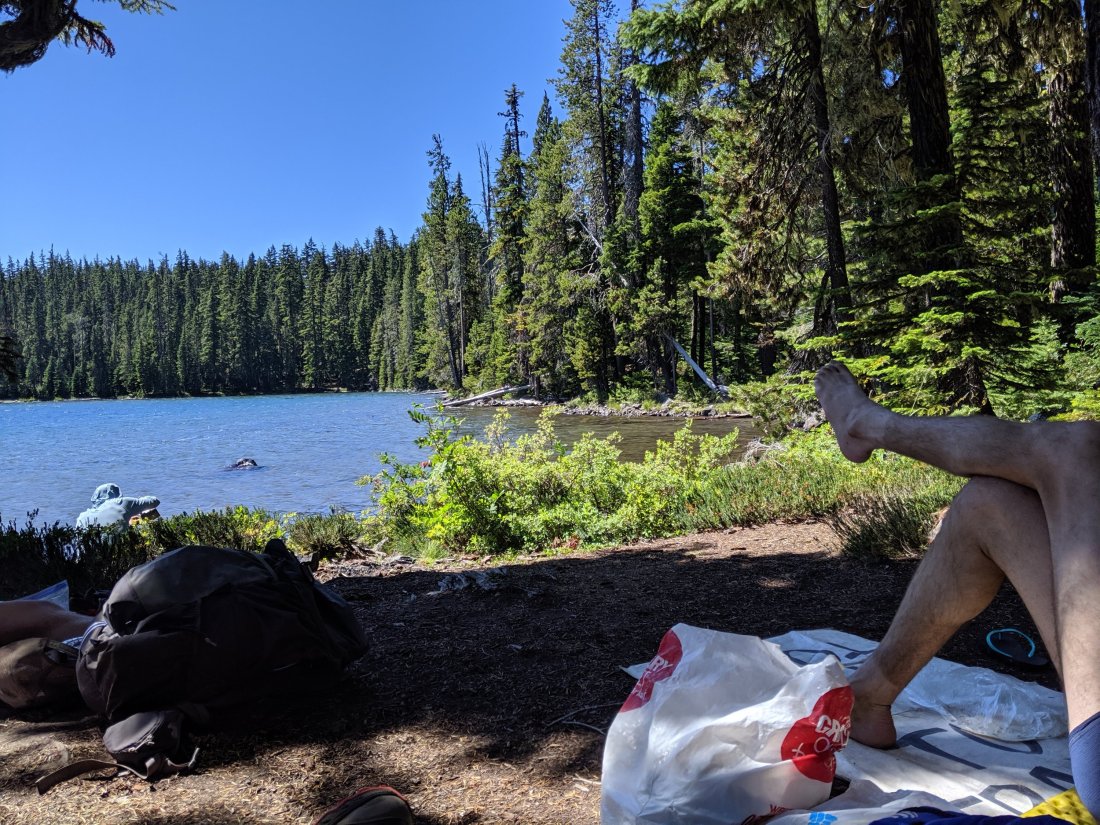 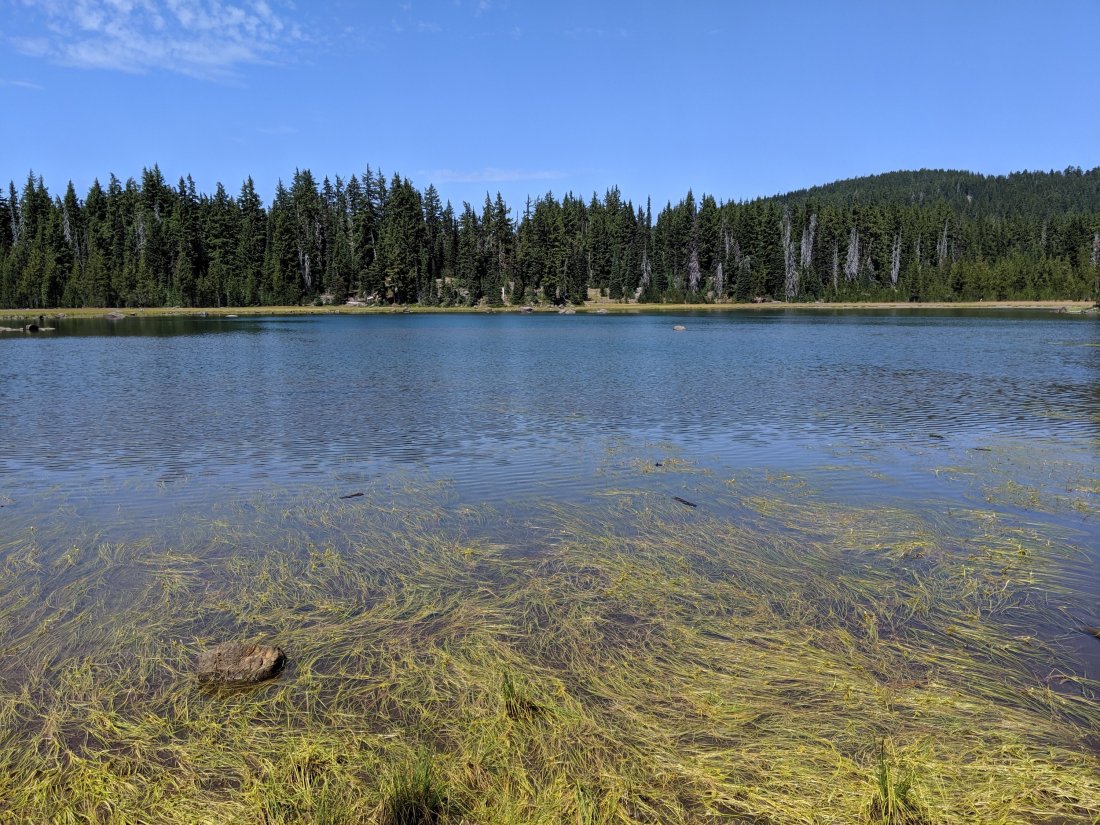 After lunch on Day 113, the scenery finally opened up into some meadowlands with good views out to the local major volcanoes: Mt Bachelor and the Sisters. North, Middle and South Sisters are all of similar height (probably 11-12k feet) and in very close proximity to each other, and several smaller peaks round out the “family”: Brother, Husband, and Wife.

By the end of the day, we passed Obsidian Falls, known for its large amount of obsidian lying around. I learned from Ranger Dave at Crater Lake that obsidian is chemically identical to pumice, but whereas the latter basically solidified in foam form and is full of air, obsidian solidified under pressure and is therefore extremely dense, heavy, and looks like glass. There was one little stretch that looked like the aftermath of a bar fight, with broken beer bottles strewn all across the ground.

On Day 114 we continued beyond the Sisters. The views were stunning for most of the morning, with clear views north to Three-Fingered Jack and Mt Jefferson (overcast weather meant that Mt Hood was not yet visible). However, the hiking was also possibly the most challenging in Oregon: there was a c. 5 mile stretch of unbroken lava fields, which looked really cool, but the rocks are really sharp and hard, so every step was an adventure. 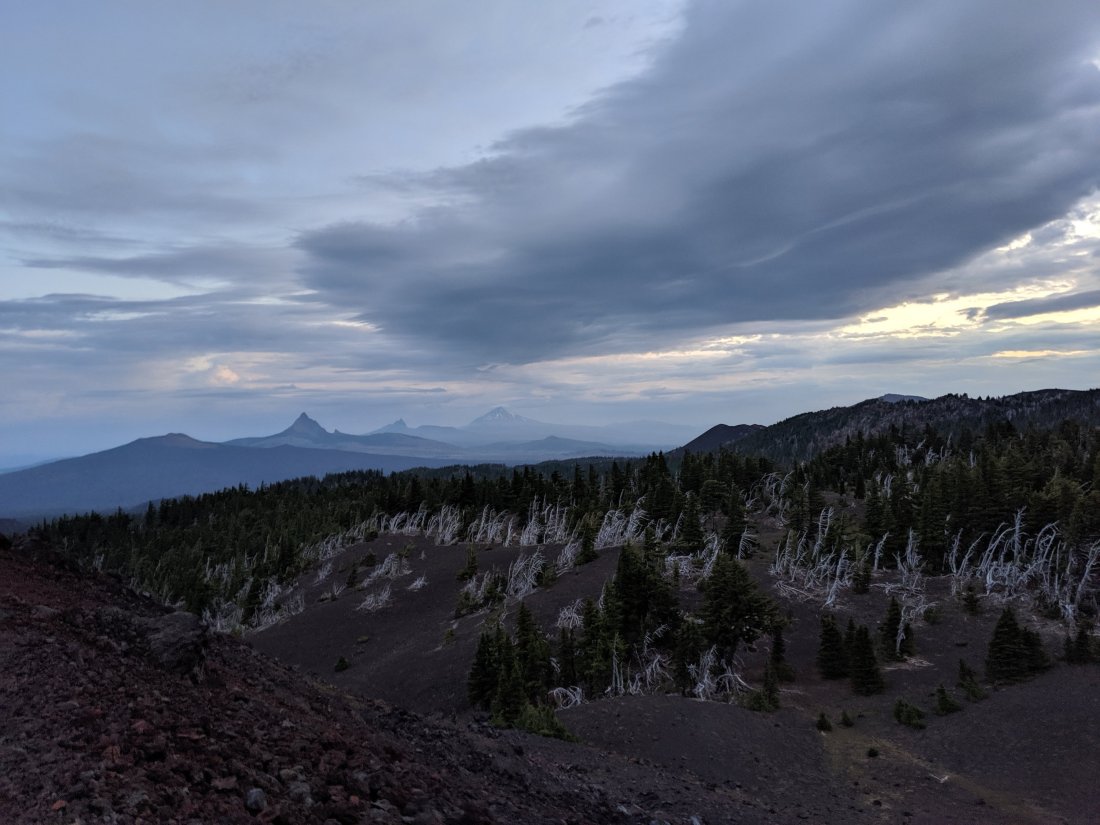 By 2 or so, we made it to Big Lake Youth Camp, a Christian summer camp which dedicates one of its buildings to hikers in the summer and serves free meals. Thankfully they hadn’t quite closed up lunch, so we managed to eat some chili and potatoes.

One thought occurred to me as I passed mile 1990: if the southern terminus represented the beginning of the Gregorian calendar, and each mile was a year, then I had just spent roughly 20 minutes on every year from the (approximate) birth of Jesus to my own birth. And the next 28 miles would represent my life so far, and some unknown distance in the next couple of days beyond that would represent the entirety of my life. So if the PCT represents the Common Era, then this little sliver of central Oregon represents my life. Deep trail thoughts, dude.

Anyway, I’m a hiker, not a philosophizer. I got to Highway 20 around 6 pm, and pretty easily snagged a couple of hitches into Bend, where I was collected and brought to dinner/drinks by my aunt’s friend Annie, who I knew as a small child but had only reconnected with as an adult in the last couple of years. It was fantastic to visit with her, and also really nice to have a guest bedroom to call my own for a couple of days, and a car to borrow to drive around Bend for my errands. So huge thank you to Annie for your hospitality! I hope the festival has gone well and I hope we’ll get to make music together at some point soon!

In the evening of Day 115, I had a flight from Bend to San Francisco, where I met my mother and brother and some other friends to go to the UC Davis vs Berkeley football game. You didn’t subscribe to this blog to read about the Bay Area, so I’ll spare you the details of my social calendar from the weekend, but here are a couple of pictures. 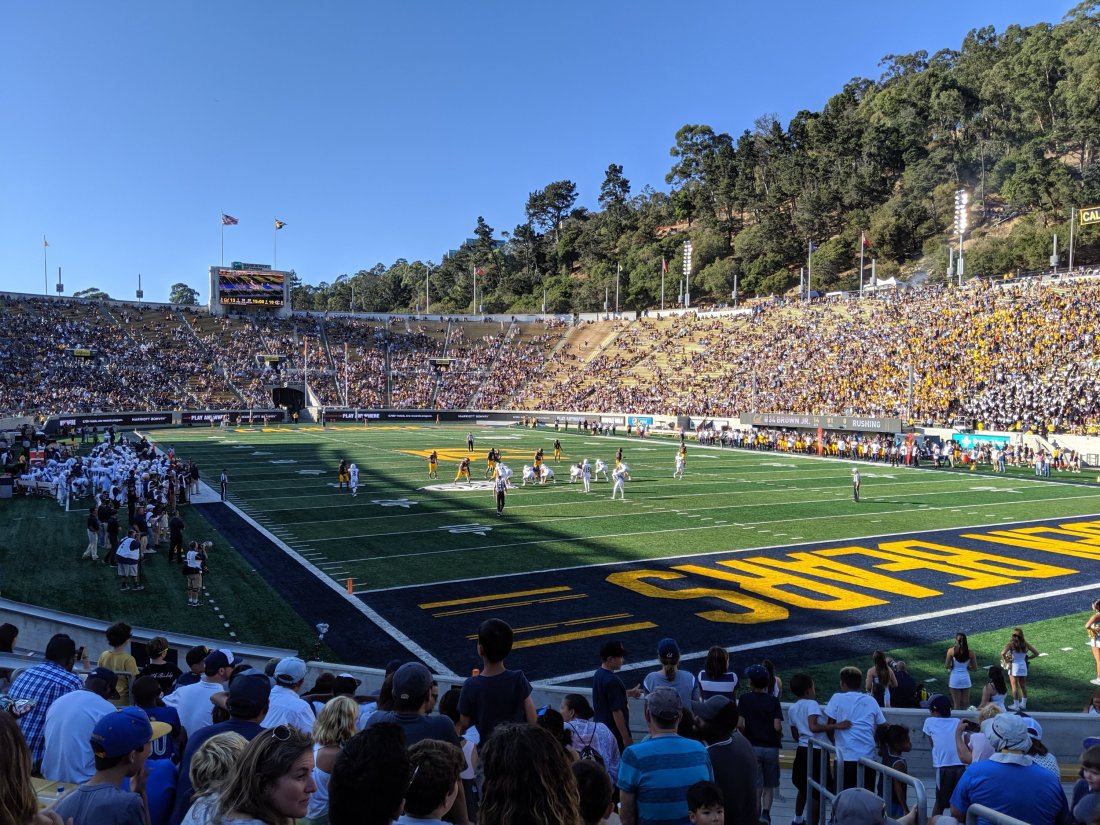 I got back to Bend in the afternoon of Day 117 and spent the rest of the day there – by the time I was ready to go, it was too late to start hitching. The next morning, I left for the trail and got to it around 1 pm, as it was a long distance and required two separate rides.

My pack was quite heavy with about 6 days’ worth of food, and my legs were a bit soggy after taking a few days off, so it was a definite slog to try to do a reasonable distance that day. I made it 15 miles, past Three-Fingered Jack but not quite to Mt Jefferson. 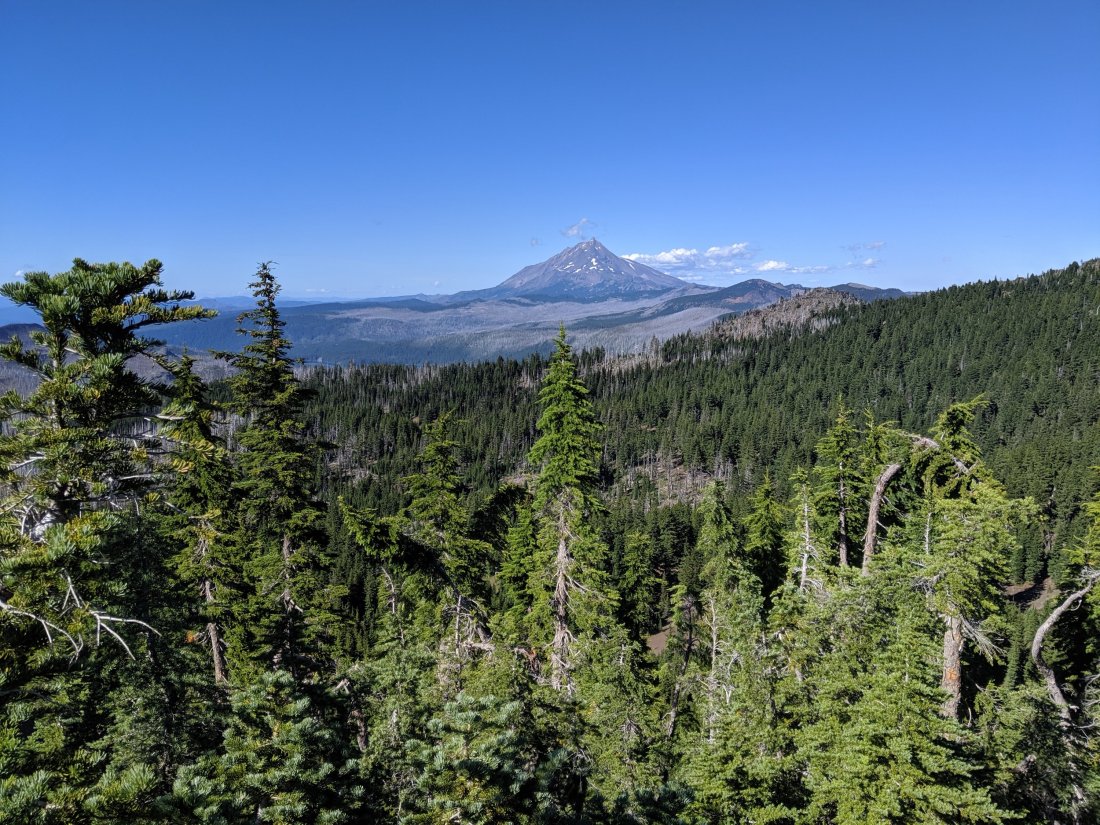 The next day, I went around and beyond Jefferson. At this point I should say that Mt Jefferson has been possibly the most unexpectedly awesome view I’ve had. It is not one of the tallest volcanoes in the Cascades, but it’s rather jagged on the top, and highly glacial on the north side. The trail passes goes around the base of it and then ascends the next ridge over, giving some dramatic, up-close, top-to-bottom views of the mountain. 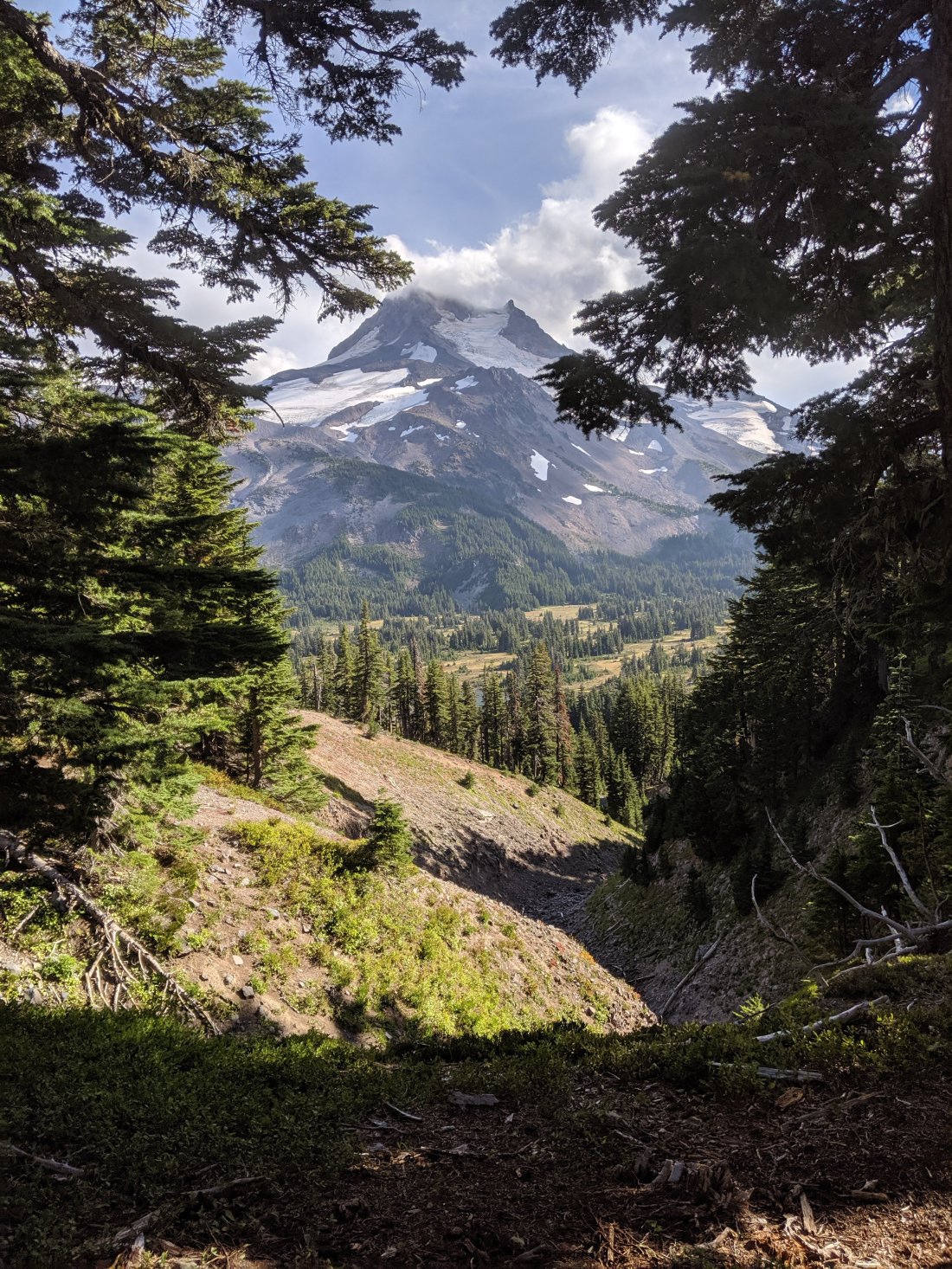 The climb up the ridge was pretty brutal though, and the trail was difficult to find at times. It really took a lot out of me, and I only made it about 25 miles before stopping a bit after 7. I know that sounds alright, but in Oregon it’s hard to justify to yourself doing less than 30 in a full day of hiking.

Around this time, I was receiving piecemeal news about the UC Davis administration shutting down and replacing the Cal Aggie Marching Band, after an investigation found a culture of binge drinking, shady traditions, and harassment. I really don’t want to use blog space to unpack all of this, but my experience in the band was overwhelmingly positive, and I was fortunate enough to be able to lead the band as its Student Director my senior year. For those of you who associate Backstreet Boys’ I Want It That Way with me, that traces back to this halftime show I arranged and directed in the final football game of my tenure in 2012: https://youtu.be/Vg3JKTVV1tY

Anyway, it was probably past due for some disciplinary action and a change of course, but those four years were some of the best of my life, and the organization was/is like a family to me and many others. It really left me feeling deflated, like a whole part of my identity had been erased in a heartbeat. I started feeling better after I was able to talk to some fellow alumni about what it means for the band community, but I had several hours between basically seeing a headline and processing all the implications where I basically only had myself to gripe and mope to.

On Day 121, I crushed it 32 miles into Timberline Lodge, basically only stopping for lunch and at Little Crater Lake, a tiny but deep and super clear pond created by fault action and fed by underground springs. It’s about 50 feet deep, but you can see the bottom very clearly, which is kind of trippy. 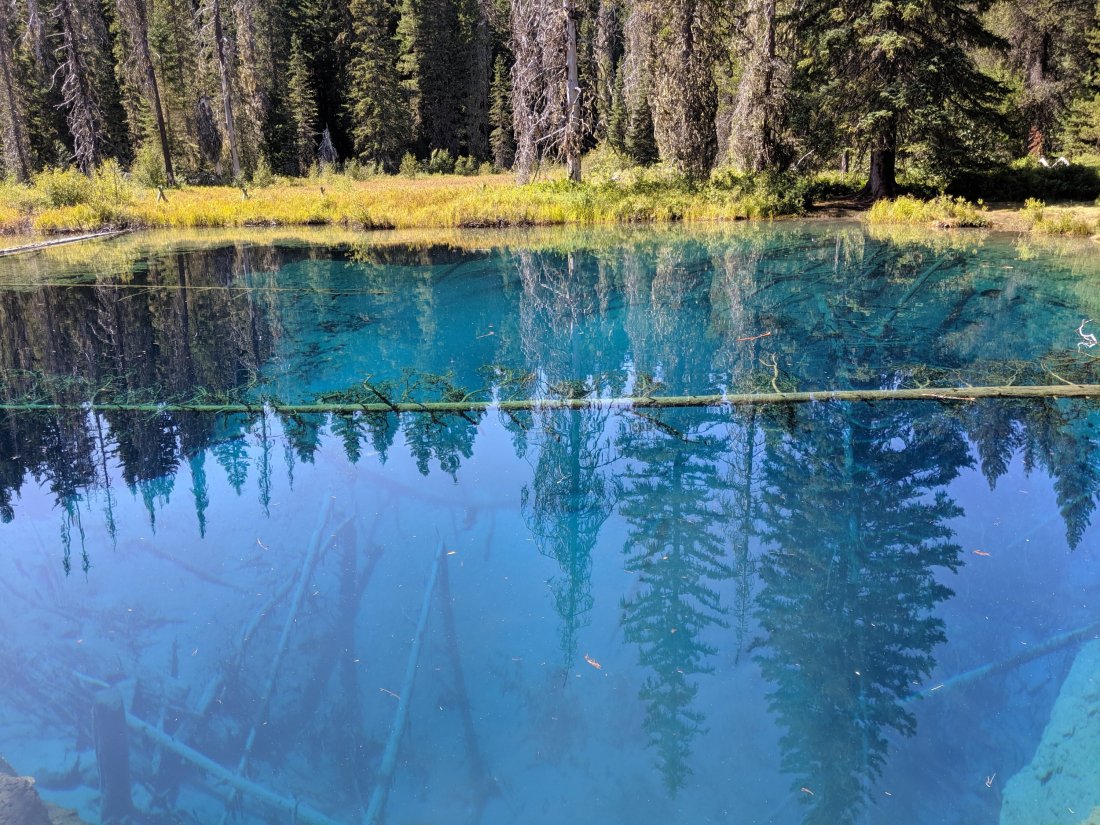 The hike into Timberline had some sweet views of Mt Hood, the tallest mountain in Oregon. Timberline Lodge sits midway up the slopes of Hood, and hosts a ski resort and is also a launch point for summiting expeditions. The building itself was constructed as a New Deal public works project in I think 1937, and there’s a cool transcript of the dedication speech from President Roosevelt where he talks about the evolving purposes of our national forests from a resource commodity to a spot for recreation. Interesting spot, and I enjoyed hanging out by the fire and sharing my experiences with the guests of the lodge.

I stealth camped that night in a row of their outdoor amphitheatre, then attended the breakfast buffet in the lodge, which was kind of pricey, but way higher quality that any other buffet I’ve ever been to.

Headed from there around 10 with the aim of making around 30 miles, so I could take a shorter 20 mile day into Cascade Locks on the Columbia River the next day. With such a late start, I was able to make it 29 miles by around 10:30 pm, but I decided that was probably good enough. Stopped at some pretty neat waterfalls along the way, called Ramona Falls, I believe. There wasn’t a ton of water flowing over them, but it was all very spread out across the falls, like water was dripping from a thousand leaking faucets.

I got up early the next morning to make it into Cascade Locks for the afternoon. I had several friends planning to join at the brewery on the river, and my aunt Megan, who is possibly my most dedicated reader, had traveled from California to hike a few miles into and out of town with me. She hiked to meet me about 4 miles south of Cascade Locks, and we walked into town together. She says she had always kind of thought she would do the PCT one day, and while that ship has now sailed, she is really taking the opportunity of my hike to be able to experience it vicariously, through following not just my blog this year, but blogs and vlogs of several of my fellow hikers. It’s awesome to know other people are vicariously out here with me, but it’s more awesome to be able to share it in person, so I’m very glad she could make it work. 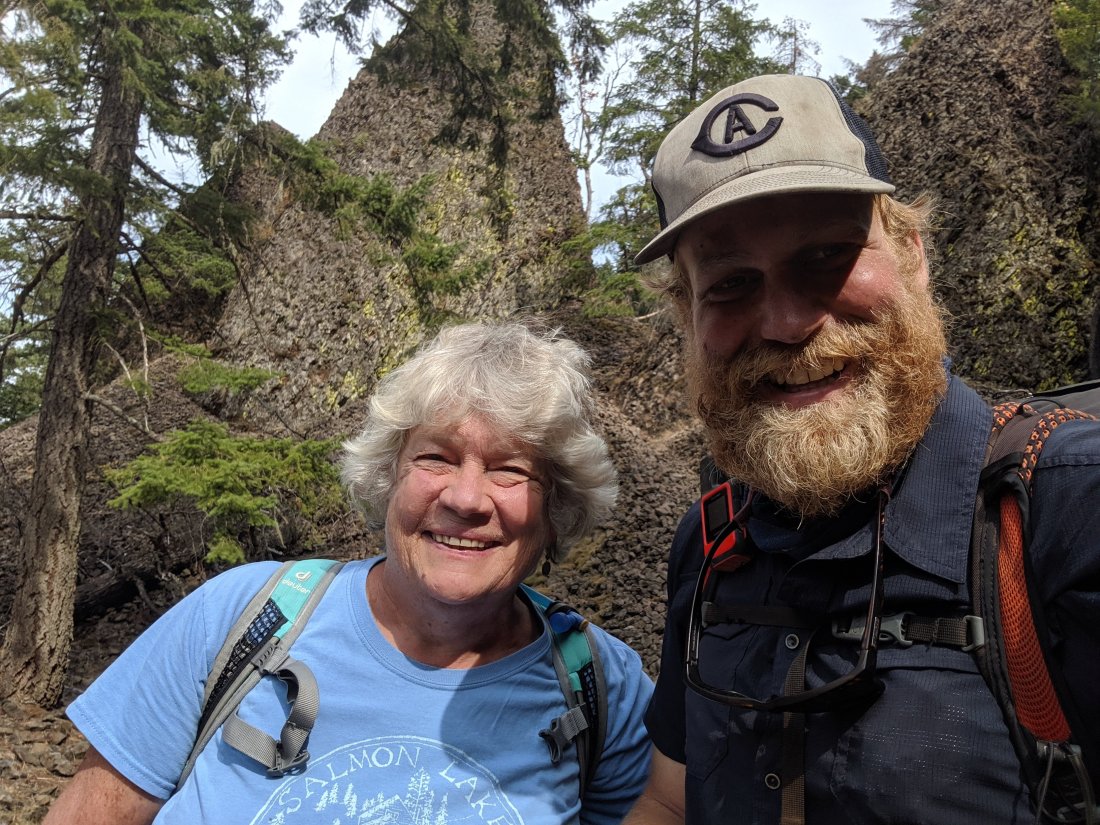 We made it into Cascade Locks a bit before 4 pm and headed straight to the brewery, where we were joined by half a dozen friends of mine from Portland and Corvallis, mostly alumni of the aforementioned marching band. I also have a couple of friends who are touring folk musicians based in Portland. I invited them but didn’t expect them to join because I knew they were on tour, but turns out Cascade Locks was actually directly in between their previous and next tour locations, so they stopped in for a quick beer before they had to head out for their gig that evening. And then also my brother Torsten and his girlfriend Sofie redeemed some Southwest Airlines ticket voucher and came up to Portland and Cascade Locks for the weekend.

So that’s how I ended the Oregon section, surrounded by friends and family in a brewery overlooking the mighty Columbia River, the largest river in the Americas which flows into the Pacific Ocean. I couldn’t ask for a better conclusion to this state, which itself has been unexpectedly awesome with all the epic volcanoes and beautiful lakes. The friend contingent all returned to Portland and Corvallis that evening, but Megan, Torsten, and Sofie all stayed the night and will walk me across the river (and a bit beyond) into Washington shortly. 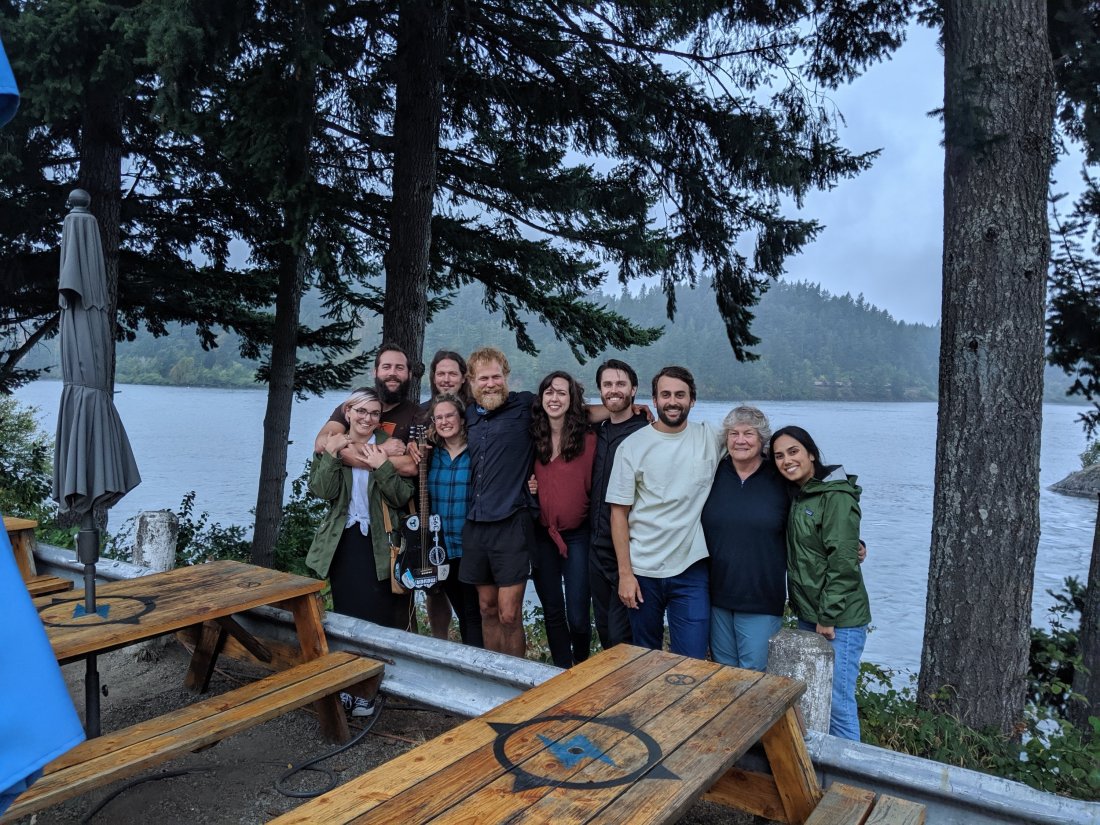 And now on to my final state!